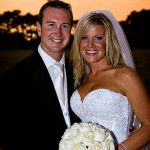 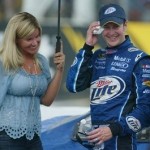 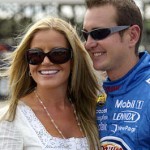 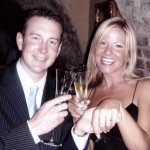 Kurt Busch’s wife Eva Busch was involved in a pit road screaming match/near brawl with  Greg Biffle’s wife Nicole Lunders. Busch hit Biffle from behind on the track, and immediately following the wreck.  As the sparks flew and dust clouds kicked up,  a pissed-off Lunders ran down pit road.  After jumping into the Busch’s pit box, which set off a face to face screeching match.

Eva Busch was originally born as Eva Caroline Bryan in Virginia Beach, VA on April 26, 1977. Kurt and Eva began dating July, 2003 and were engaged at the 2005 Formula 1 Hungarian Grand Prix race. They were married July 26, 2006, almost exactly three years to the day after their first date. The couple resides in Charlotte, NC.

Long ago in happier times, Kurt describes how he figured out that Eva was the one:

She shops well, is good with the credit card and looks good sitting on the pit box.

I have no qualms with that logic.  Unfortunately, it’s obvious that the couple split up.  Busch has since moved on to date an alleged assassin (seriously) and I kid you not, a Polo player.  Say what you want about the guy, but he’s run a full spectrum on the dating circuit.  Kurt and Eva spit in 2011, shortly before Driscoll entered the picture.  In a longform article on SB Nation, the author conducts an interesting dissection of the media’s lack of coverage of the split.  It lends credence to the idea that problems off the track may be a contributing factor to problems on the track.

Even as fans on Twitter questioned Eva Busch’s absence and the lack of a wedding ring on Kurt Busch’s finger throughout the last few months, I basically turned a blind eye to the story.

I justified it by telling myself, “Well, it doesn’t affect him on the track.” But given Busch’s vitriolic tirades on the team radio this spring – which were widely reported on – perhaps it did. It’s at least a question that could have been asked; it wasn’t, though.

Certainly worth your time to take a look. 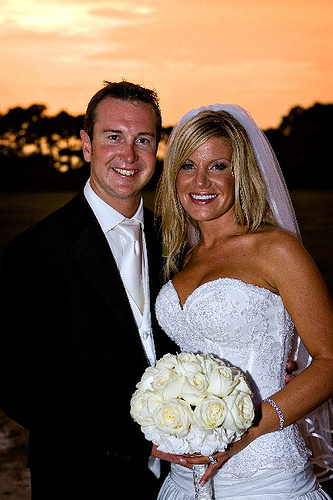