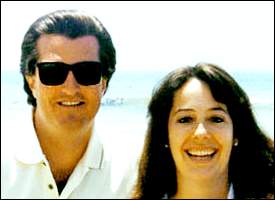 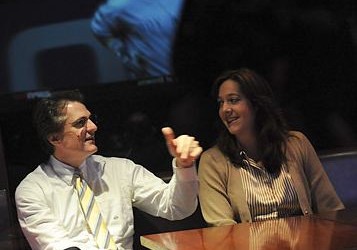 In our line of business, we’re rarely surprised by much… but in this instance,… man, this one caught us off guard.

The fact that Mel Kiper is married isn’t necessarily the surprising part (although I would have placed money on him being a total player that just strolls into any bar with that hair and dominates). The surprising part is more so the scope of the relationship.

Mel is prodigious with the amount of time he dedicates to watching film (and say nothing about the hours it seems like he’s on ESPN daily). If you thought Mel did all this work by himself you would be wrong, dead wrong. Mel clearly needs help to be Mel Kiper, and his wife Kim is his business partner. Yes the man that you see on TV religiously from December until the April draft has one work partner and that is his wife. Kim, who claims to be a casual football fan handles all the aspects of the business (outside of scouting) to build his draft empire. Kim handles everything from helping to write the book, to arranging TV spots, to setting up interviews, Kim is right there to make it all happen. This allows Mel to watch the endless amount of tape and make the numerous phone calls needed to make it all happen.

So, how does it work, being with Mel both at home and at work with no reprieve? According to Kim in an article she wrote on ESPN’s now defunct Page 2:

We see each other 24-7, but we manage to get along perfectly. Our personalities mix well — he focuses on the football, and I make the office more efficient. That can be a tough task sometimes, because it involves dragging Mel into the computer age.

Mel and Kim Kiper have been married for over 20 years now, and have one daughter named Lauren.