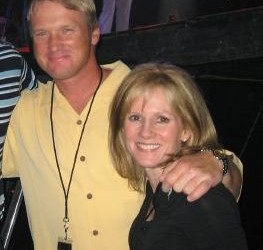 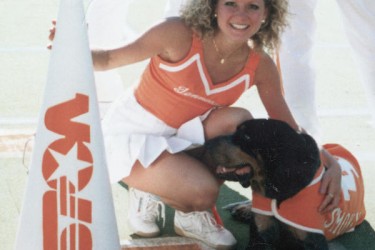 I’m going to miss Jon Gruden when he leaves the Monday Night Football booth although some people seem to think Chucky is a little too over-the-top in his MNF gig. If you’ve ever listened to the Toucher and Rich morning show on 98.5 The Sports Hub in Boston they play a fantastic game using sound clips from Gruden which highlight just how over-the-top Gruden can be. Yet if you peel back that first layer Jon knows his football and more importantly he’s passionate about the game. Yet I’ve resigned myself to the fact that soon enough the itch that Jon has for football coaching will come back.

One place that Jon was once heavily rumored to go to was the University of Tennessee, but that now seems unlikely. Tennessee is a special place for Jon. Not only did he get his start in coaching at Peyton Manning’s alma mater but he met his wife Cindy there. Jon started as a grad assistant for Tennessee. As you can see from one of the pictures we’ve posted, Jon Gruden’s wife Cindy Gruden was a cheerleader at UT. I always love going back and reflecting on older photos. Cindy looks like an extra from a cheesy 70’s or 80’s horror flick.

With the history that Jon and Cindy Gruden had at Tennessee, many thought that Gruden and UT would be a perfect fit. That doesn’t appear to be the case as Jon, through his people, have made it known he is not interested in the job. So where will Jon end up? My guess is back in the NFL with either the Eagles or San Diego. Philly would make a lot of sense for Jon and Cindy as their son Deuce, plays at Lafayette College in Pennsylvania. No Deuce isn’t his real name but since he’s Jon II it looks like somewhere along the way he picked up the nickname. 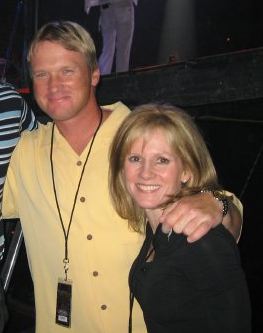