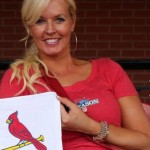 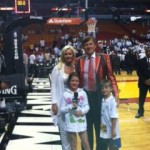 However, one fateful evening, I managed to slip an NBA on TNT game by her without much complaint. After another game where Greg Popovich made fun of Craig Sager, my wife chimed up: “Look at that guy’s outfit. Does Craig Sager have a wife?”

Oh, Mrs. PlayerWives.com, Craig Sager certainly does have a wife. And Craig Sager, crazy wardrobes and all has done quite well for himself

Meet Craig Sager’s wife Stacy Sager. Stacy Sager is a former Luvabulls Chicago Bulls dancer, that the boldly dressed sideline reported clearly wooed in one of his many games. Both Craig and Stacy Sager have been quick to point out that Craig’s crazy suits are nothing more than his “game uniforms.” Craig enjoys letting his young daughter pick out his ties, although she has a proclivity towards pink and purples.

Craig and Stacy Sager own and operate Jocks and Jills Sports Grill in Atlanta. Craig proposed to Stacy at the 2000 World Series, where she obviously accepted. The couple, including their two children, Riley and Ryan Sager, live in Braselton, Georgia together. Craig has three children from his first marriage, most notably, Craig Sager Jr was a wide receiver at the University of Georgia. 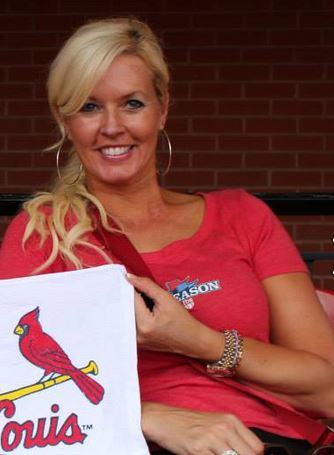