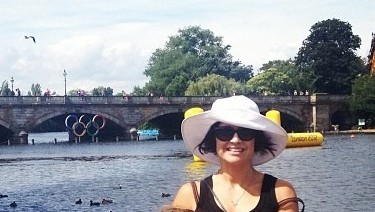 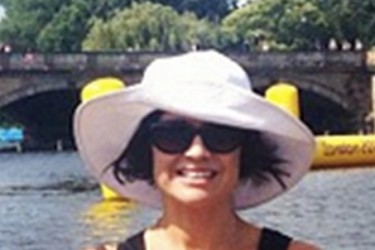 Bill Simmons’ wife Kari Simmons keeps a low image profile on the internet but a high word profile writing wacky articles on it. I’ve been reading some of Kari’s articles, and they veer into all sorts of territories. She’s opinionated, and she’s also pretty funny.

One good example of Bill Simmons’ wife Kari being funny is how she describes his relationship with his sports geek friend, Hench. In one article, she explains how they “own a fake baseball team together.” She says they talk so much on the phone and in such an annoying way that she made him get a special phone line that is dedicated strictly for him and his friend to talk about sports. She calls it the “bat phone.” She also calls their fantasy league partnership the “league of dorks.” No, Kari does not pull any punches. She explains how listening to them talk is like being in a nail salon and suddenly having to listen to a bunch of the nail ladies freak out and start screaming in another language.

Bill’s wife Kari also enjoys being highly critical of the show The Bachelor, which is something I have in common with her. She explains that she and her friend have developed a show as an alternative to The Bachelor called “The Hot Homeless,” and it’s all basically the same premise as The Bachelor except the contestant is a good-looking homeless guy that gets to pick his princess from 25 girls because he’d actually appreciate her. Then she comes to the conclusion that he’d just dump her after the show and try to climb the social ladder of Hollywood. Having never been to Los Angeles, I have no idea if the homeless folks of Los Angeles are attractive, but I agree with her about changing the premise of The Bachelor to give more normal guys a chance at scoring some hot tail. Kari Simmons is an idea gal.