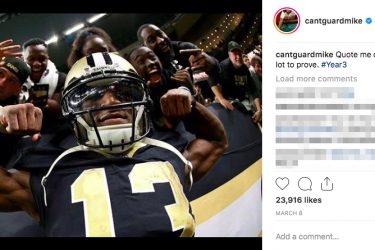 Originally, when we wrote about Michael Thomas’ girlfriend, we had nothing.  Bupkus.  Nada.  Just, nothing.  A you’ll see in the post below, we were so desperate to write about him that we came up with a list of women who would fit the bill well.  A PlayerWives round of matchmaking if you will

But, in the months to follow, we’ve come across some information, which while not exactly credibly proven, is…. something I guess.

So, let’s meet the woman rumored to be Michael Thomas’ girlfriend, Mariah

This one comes to us from SportsGossip.com, who’s proven them to be a fairly reliable source when it comes to original scoops.

Michael and Mariah reportedly began dating in 2019.  Mariah has a child from a previous relationship, though not publicly known who the father is.  She was apparently once married to a player in the NBA, though that unnamed player was quickly out of the league.  The rumored “cleat chaser” moved on to Thomas

And now we’ve been tipped off about his girlfriend.

She has a baby from a previous relationship.

Supposedly she’s a cleat chaser, and was married to another athlete who was drafted in the NBA and was cut pretty quickly thereafter.

Nothing has shown up in his social media feed to support this, so there’s not much to go on to verify here.  But again,… it’s something.

If Michael Thomas’ girlfriend exists, he doesn’t want anyone else to know. Michael does not post pictures of a significant other on his social media feed. He is also the nephew of Keyshawn Johnson, former NFL 1st round pick and wide receiver. In fact, Keyshawn interviewed Michael for ESPN in January of 2018. However, he didn’t ask Mike about his lady. Now, we will recommend some girlfriend options for him…

This seems like an easy recommendation since Denee already dances for the New Orleans Saintsations. They are the official dance team for the team, and the relationship prospect is easy because they both work for the same organization. Yes, one of them is paid scales of magnitude more money for that organization, but does it matter? Denee has danced with the group for at least three years, according to the dance team’s website. She majored in sports management at Southeastern Louisiana University. Denee says her favorite song is by Pitbull. She said her best habit is time management and her favorite character trait is sincerity.

Again, a great choice for Michael Thomas’ girlfriend is someone who already lives in his city. Indya is also on the Saintsations just like Denee. She attended Loyola University and attained a Bachelors in Business Administration. Now, she also works for a medical care company and calls herself an aspiring public accountant, according to her work profile. Does she like sports or just enjoy dancing? Michael Thomas said his favorite athlete growing up was Allen Iverson. He even posed in a photo with his childhood hero. When Keyshawn learned about that, he said he felt surprised. Who was Indya’s childhood sports hero?

One more beautiful Saintsations cheerleader rounds out this list. Michael Thomas’ girlfriend should be Bailey Davis. Again, she lives in New Orleans. They can meet up any time he is in the city. Both Bailey and Michael are religious so that works out. The Saints featured her in their swimsuit calendar. Bailey also has an official Saintsation social media account. She joked on social media about her hometown in December of 2017. The task was to describe it in four words. She chose “never heard of it” for her words. Does she enjoy living in New Orleans now? Does she know any of the players? She also shared a picture of a text she received where a guy asked her to sell her underwear.