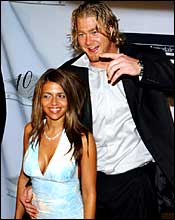 Jeremy Shockey’s ex-girlfriend Vida Guerra was not with him very long – if they were together at all. They first made headlines after appearing at the opening of Jay-Z’s New York City nightclub 40/40, which Guerra later dismissed in an interview with XXL Magazine: “I went to his Sports Illustrated shoot because he wanted me in the issue. That was the first day I met him. Then we all went out to eat—my manager, his sister, his friends. We’re eating and discover that we’re all going to the same 40/40 party. But nobody could get in, just me and him. So we’re walking together on the red carpet and if you walk next to somebody on the carpet they’re like…”

Guerra shot to fame after sending pictures of herself to FHM at the insistence of her friends. This landed her features in the mag which led to appearances in P. Diddy’s “Shake Ya Tailfeather” video, and on Chappelle’s Show and ESPN’s Cold Pizza.
She was #26 on FHM’s Sexiest 100 Women list, and has twice received the Best Butt award from the magazine.