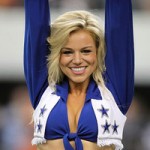 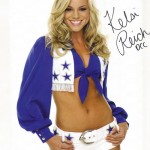 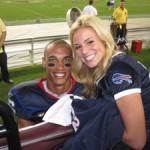 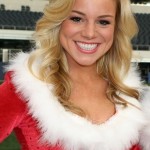 11-11-2011: As a cheerleader, it’s the job of Bills WR David Nelson’s girlfriend, Kelsi Reich, to root for the Cowboys. Normally, that is easy. Cheer when the Cowboys score, don’t cheer when the other team scores. Pretty hard to mess up. Except, that is, when your boyfriend plays for the other team. Based on recent comments by David, it sounds like he might have something in store if he does score – especially since everyone in the media knows about their relationship and the cameras will surely be rolling. Says David, “If I’m in the area where she is I’m sure I’ll have something planned for that, but I also don’t want to get her in too much trouble”.

In addition, when questioned about whether this surprise might include a marriage proposal, Nelson said, “I can honestly tell you 100 percent it will not be a proposal. Been there and done that”. Too bad, especially since it’s quite possible that, given her admitted strong faith in God, the couple is waiting until marriage – or as I like to call it, pulling a Phil and Tiffany Rivers.

When David Nelson came out of Florida, he went through a Pro Day, where he garnered interest from a number of teams, including the Dallas Cowboys. David was eventually signed by Buffalo as an undrafted rookie free agent, which actually turned out to be a blessing as the couple wouldn’t have to work around the No Fraternization rule between the Cowboys cheerleaders and players.

Kelsi’s bio paints the picture of a woman with extremely strong faith. Her favorite quote is from Proverbs 3:5-6, and her lifelong goal is: To raise a beautiful and healthy family with a wonderful husband that loves the lord.” If you’re ever looking for a bible passage, Kelsi’s twitter feed is a great place to get them, as her timeline is filled with what’s seemingly a daily quote.

David and Kelsi are both from the Dallas-Forth Worth area. Kelsi makes no bones about it that while she roots for David, when the Cowboys and Bills meet up, she will root for her hometown ‘Boys. We’ll see how that plays out this Sunday when Dallas and Buffalo collide in Dallas. 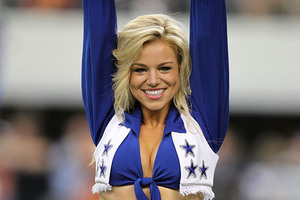