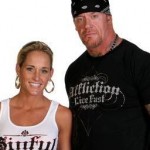 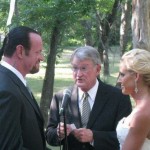 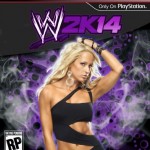 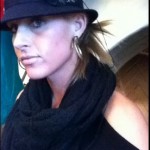 Can you imagine how hard it must be to be The Undertaker’s wife?

When you consider for a moment that the nearly 7 foot phenom has spent the last 20+ years on the WWE circuit gone 80% of the year, it really shouldn’t be shocking to consider he’s now onto his third wife. The Undertaker’s wife Michelle McCool may very well be the one that sticks however. Michelle McCool knows the WWE travel schedule as she spent the better part of a decade wrestling for the company. She was a two time Women’s and Diva’s champion before retiring from the industry in 2011.

The Undertaker married Michelle McCool on June 26, 2010. The couple had their first child in 2012, McCool’s first, and Taker’s fourth. As most wrestling fans have seen before, Taker (real name Mark Calaway) had a tattoo saying “Sara” on his throat for his second wife, Sara Calaway. Sara served as ‘Taker’s ring valet on occassion during their marriage, which lasted from 2000 until 2007. They had two children together, daughters Chasey and Gracie. After their marriage ended, Calaway removed the Sara tattoo from his throat, and has replaced it with the names of his daughters on either side of his neck.

Before Sara Calaway, The Undertaker was married to Jodi Lynn for a year from 1988 to 1989.

The 51 year old Undertaker has been doing fewer WWE dates in recent months, and there are plenty of rumors that this could be his final Wrestlemania appearance where his 22-0 streak goes on the line against Brock Lesnar. Lesnar and Calaway have plenty of history, and according to The Undertaker,… it’s personal. 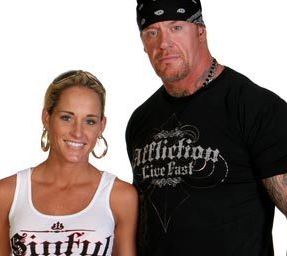