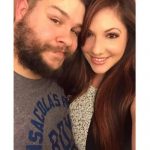 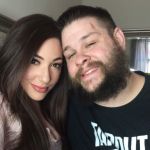 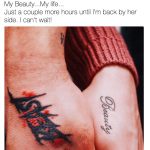 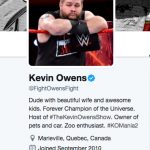 Kevin Owens’ wife Karina Steen actually took his real last name. This is a fairly common thing in wrestling: a wrestler uses a fake last name that sounds normal (but also so Vince can keep the licensing rights). Chris Jericho did the same thing since his last name is Irvine. Karina recently deleted her Instagram account because she grew tired of harassment from strangers. That move came back around late October of 2016. One can imagine it gets taxing to be the wife of a famous wrestler and have to listen to random nonsense and noise from fans and detractors of Kevin.

Karina is the mother of their two children, Owen and Elodie. I love the name Elodie. I wonder who came up with it? Kevin Owens’ wife confessed she is a makeup addict. I guess that’s why she calls herself beauty and Kevin calls himself beast. They each have a tattoo of these titles on their arms. Before she deleted her social media account, she posted a video of their very young son Owens’ reaction to Kevin’s first appearance on WWE Raw. The video disappeared since the account is gone, but apparently Owen felt joy and excitement. That’s just what you want to hear from your wife when you get home from a match on a big television debut.

Kevin himself deleted his own Instagram account after people tried to keep hacking into it. Apparently he posted a video of himself eating some chicken, and people loved it. Then two days later he shut it all down. Kevin Owens’ wife had a tribute posted to her in the middle of February of 2017 just to tell her how much he appreciates her.  2017 is the eleventh year for them together. That’s very impressive! She watched him build up his career, and now they enjoy the fruits of that labor. 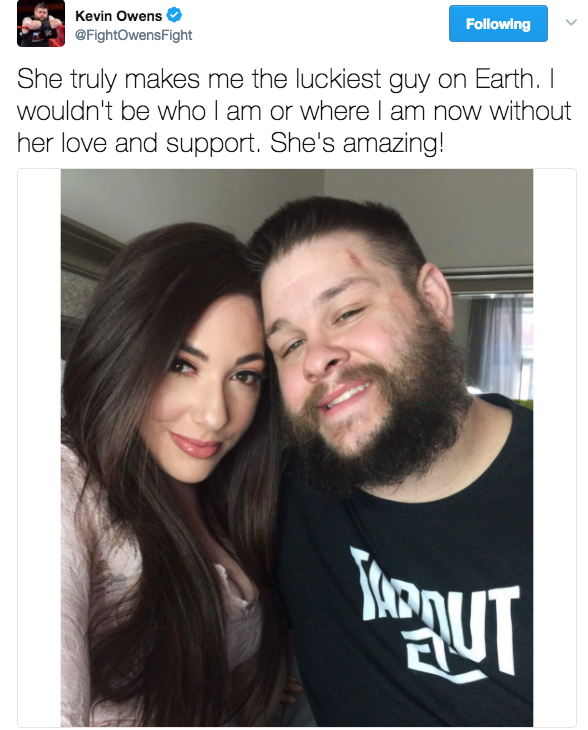