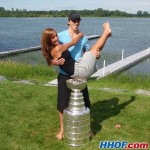 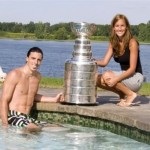 Now, imagine the stress I just laid out for Marc-Andre Fleury.  But, he’s more equipped to deal with it than maybe anyone else in the NHL.  In addition to the Stanley Cup stress, Veronique Fleury (formerly LaRosee)  helped keep him focused. Less than a week before the 2013 NHL playoffs kicked off, Veronique gave birth to daughter.  Estelle Fleury arrived just in time to make sure Marc-Andre would be fully focused and present for the first seeded Penguins playoffs. Estelle was born at almost 10 pounds and is the couple’s first child.

The arrival of Scarlett Fleury was met during a much more relaxed time for the couple.  Scarlett was born smack dab in the middle of the offseason, July 22, 2015

Marc-Andre Fleury and Veronique were married in 2012 after getting engaged in the summer of 2011. The couple was married in front of a slew of friends and family including dozens of Penguins teammates. Marc-Andre and Veronique first began dating at the age of 15 in 1999 the year before he started playing in the Quebec Major Junior Hockey League.

Veronique Fleury graduated from Robert Morris Colonial in 2012.  The graduation took place just two weeks before they were married.  Veronique’s Instagram is a supportive, and loving dedication to her family.  She regularly posts pictures of her and her daughters attending games together, or beautiful family pictures.  A Canadian family embodying the American Dream.

In her spare time, which being a mother of two young kids is clearly limited, she also holds a job.  Veronique is a co-founder and owner of a boutique clothing company, Alex et Estelle.  The company has a focused mission statement

Alex et Estelle is the union of two moms who are passionate about their kids, fashion and philanthropy. We decided to launch our own clothing line to offer conscientious parents like us stylish, simple options that are in line with our values. Our priority is to offer products conceived ethically, mainly in Montréal. Alex et Estelle is softness, quality and love of sharing; because with every purchase, we give back a portion to children in need.