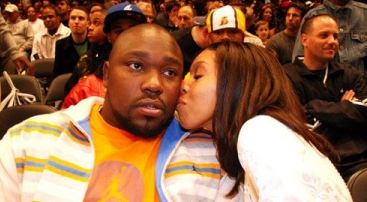 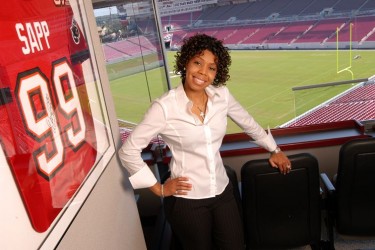 Well, Warren Sapp just got fired from the NFL Network for soliciting a hooker. We mine as well tell you about Warren Sapp’s ex-wife Jamiko Vaughn, who is just one of three separate women he pays or has paid substantial alimony and/or child support to. If there was an early 2000’s “Shawn Kemp” award given out to NFL players, Sapp would probably get at least one. He does appear to be plainly reckless and thoughtless about a little thing called contraception, but that’s his right. Maybe he just likes to spread the seed far and wide.

So Jamiko had two kids with Warren, and after his numerous affairs, she divorced him and got a total of $13,168 per month in child support for each of the kids. That means over $316,000 per year, folks. But wait, that’s not all– what else do we have for him, Bob? Aside from Warren Sapp’s ex-wife Jamiko Vaughn and the gigantic payments for their two kids, Sapp also has to pay child support for a child he had with a woman named Angela Sanders that amounts to $2506 per month. And to round things out he has yet another child with a woman named Chantel Adkins whom he pays $5164 per month and a lump sump college contribution of $84,924. When totalled up, Sapp’s child support works out to a staggering $34,006 per month. Now, I doubt he’s still paying that much since all of these court cases were in and around the early 2000’s, but to put it in perspective– Sapp had multiple years of paying over $408,000 annually in child support. Quadruple ouch.

Warren Sapp’s ex-wife Jamiko Vaughn married him at a Pro Bowl celebration in the late 90’s in Hawaii, and they were married for several years while Sapp was constantly fooling around. It’s no wonder after all this that Warren went bankrupt. Sorry, Warren, but these kinds of child support court cases can be easily avoided with some caution and restraint, and after having made over 82 million dollars as a player, the old “shake-my-head” response seems proportional.