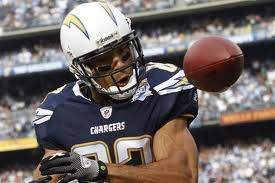 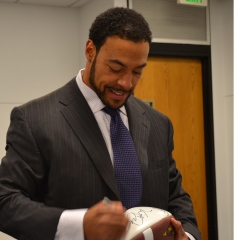 After a highly successful career at the University of North Colorado, Vincent Jackson was honored to be inducted into the 2011 Athletic Hall of Fame. During his induction speech at the February 2011 event, Jackson spent time thanking his parents, and infact thanked Mavin Gaye for providing the inspiration for his creation. After discussing his time at Colorado, Vincent Jackson asked his girlfriend Lindsey VanDeweghe to join him on stage where he shocked the crowded room by dropping to one knee and saying,
“I love you, I will always love you, I want to start a family with you, I want to spend the rest of my days with you. You are my soulmate. Will you marry me?”
She said yes, and Lindsey VanDeweghe became Mrs. Vincent Jackson when the two were wed on July 16, 2011. They have no children, but two dogs, Deeja and Cody.