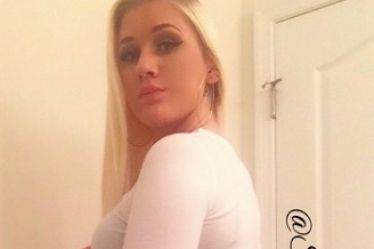 Russell Wilson’s girlfriend Snow Phat is proof positive that the Super Bowl QB knows how to get over things in a big way.

After a messy, and rumor laden divorce to his wife, Ashton Wilson, Russell Wilson has moved on. Despite more than 8 months of silence from Russell Wilson’s life off the field, Danger Russ backed his way back into the gossip pages with news of him dating an Instagram model, known affectionately as Snow Phat (self proclaimed)

Snow P, whose license shows the legal name of Tifanie, is an Instagram model, quick to show off her ASS-ets in many an Instagram picture. Some of the tamer examples are shown to the right. Snow Phat has the single most hilarious and polarizing bio of all time juxtaposing the following in exact order (I promise you, this is real):

Thanks to WordPress for not letting us use emoji’s in the text body – see the image below to prove we’re not lying… BUT in addition to the cross, the snowflake and gun emoji’s, DMV’s baddest white bitch, makes sure to put God first.  Just to be clear there.

So heres where things get interesting. Sports gossip site, TerezOwens (who has been right as much as they’ve been wrong), passes along this interesting nugget:

Our sources tell us Wilson’s PR team have been trying to rough up his image a bit, as he’s been struggling to connect with the Urban demographic.

We are absolutely NOT about to get into a discussion about race here, but I will say that if their idea to toughen up his image with the urban community, dating white women won’t do the trick. If you have any questions where we’d come up with this notion, take a peek at any of the comments sections from our interracial relationships on this site…. Yikes.

Listen, if Russell Wilson is happy, then cool. We wish him all the best. But as someone who has watched every episode of The Wire, AND listened to Serial, let me tell you that the “DMV’s Baddest White Bitch” has to be pretty, pretty, pretty bad. Good luck, Russ.