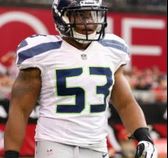 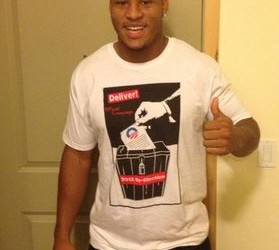 The Super Bowl MVP is either amazing at hiding his personal life, or there’s nothing to report. With another Super Bowl on the horizon, the media spotlight will shine brighter than ever, and you can bet we’ll keep our eyes peeled.

Malcolm Smith is having a hell of a Super Bowl,… and if there is a woman who can be called Malcolm Smith’s girlfriend, you can bet she’s enjoying this.

After pulling in a pick-six interception returned for a touchdown against Peyton Manning in the first half, Malcom Smith chimed in with a fumble recovery midway through the third quarter. After Seattle tacked on 7 more in the ensuing drive to push it to 36-0, the Seahawks appear to be well on their way to a Super Bowl title. With two impressive and momentum shifting turnover recoveries, Malcolm Smith may be in a heated race for MVP with teammate Percy Harvin. Considering we already know about Percy Harvin’s girlfriend, we figured it was time to find out about Malcolm Smith’s girlfriend or Malcolm Smith’s wife.

Unfortunately, after exhausting our resources,… we’re pretty sure Malcolm Smith’s girlfriend doesn’t exist (and we know that Malcolm Smith’s wife doesn’t). Smith, the Seahawks last pick in the 7th round of the 2011 draft, is probably best known as Steve Smith’s brother. Before you get excited and line up your “Ice Up, Son,” jokes, we should let you know that his brother is the bad Steve Smith, of former New York Giant and Philadelphia Eagle fame.

During his time at USC, Malcolm Smith was diagnosed with achalasia. Achalasia is classifies as a disorder of the esophagus, which prohibits food from progressing to the stomach. After suffering of months of weight loss from food getting stuck in the esophagus forcing Smith to throw up, he underwent surgery to help handle the disorder. While surgery did provide slight assistance, a strict diet has provided the most help.

His weight has clearly returned, and any esophageal issues are the furthest thing from his mind. Swallowing a couple Bronco turnovers are settling pretty nicely, no matter what diagnosis he may have.