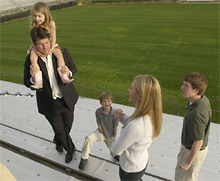 Jim Harbaugh and wife Miah Harbaugh were divorced in 2006 while Jim was coaching at the University of San Diego. They have three children together: sons Jay and James, and daughter, Grace. Miah and the children live in Coronado, CA while Jim has moved on. We covered Jim Harbaugh’s new wife Sarah Harbaugh extensively as well.

Though the strains of high level coaching are rumored to be the culprit for splitting up the marriage, Miah acknowledges there was simply no other career path for her husband Jim Harbaugh. “It’s his family and what his dad did. It’s in his blood. He lives football. He loves the game. He had to have some way to stay in.”