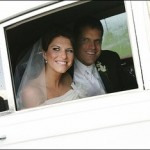 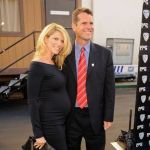 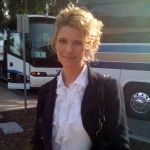 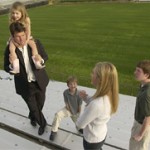 Sarah Harbaugh recorded the hilarious PSA for Dockers and the video has since exploded online. We’ve included the video below for your viewing pleasure.

Relationships are quirky, and can spring out of nowhere. For example, Jim Harbaugh’s wife Sarah Harbaugh (formerly Sarah Feuerborn) met the then University of San Diego head coach in the parking lot of a PF Chang’s in 2006, just months before Harbaugh jetted to Stanford for their head coaching gig. Sarah was still living in Las Vegas, and Jim Harbaugh was recently divorced from ex-wife Miah. They were married January 5, 2008. Jim has three children from a previous marriage, sons Jay and James, and daughter, Grace. The couple has three children together, daughters Addison and Katherine, and a newborn son.

There’s no dispute that despite three kids in a short few years, Sarah Harbaugh has put herself back together nicely. And Jim Harbaugh is not shy when it comes to showing off his hot wife. In a November, 2009 tweet, he posted a picture of Sarah with the caption of, “My beautiful bride, Sarah, the reigning ‘Hottest head coach’s wife in the Pac-10.'”

As proud as Jim is of his wife, Sarah, the former Stanford head coach also loved him some Andrew Luck:

“I was thinking just the other night that two people in my life, my wife and our quarterback, Andrew Luck, have a lot in common in that they’re just both perfect. With most people you say, ‘If they only didn’t do that. Or they didn’t do this.’ Or you wish they could do this, or you wish they could do that. But I don’t do that with my wife Sarah or Andrew Luck. They are just absolutely perfect the way they are. For football coach that’s pretty great — to have a great wife and a great quarterback.”

As we mentioned, Jim Harbaugh’s first wife, Miah Harbaugh split from the coach in 2006 (presumably before the PF Chang’s meeting with Sarah). Without speculation, Miah offered a unique glimpse into Jim’s career path when she offered up:

“It’s his family and what his dad did. It’s in his blood. He lives football. He loves the game. He had to have some way to stay in.”

Apropos of nothing, but always worth a viewing,… we need to remind you all that Jim Harbaugh was once on Saved By the Bell…. but it was on The New Class, so it doesn’t really count. It’s the old analogy, if a tree falls in the forest and no one is around to hear it, does it make a sound? If Jim Harbaugh hacks up a cheesy appearance on Saved By The Bell The New Class, did it ever really happen? 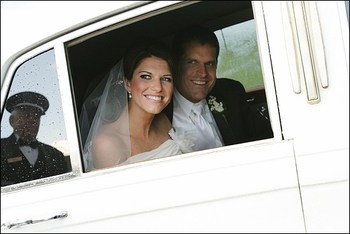