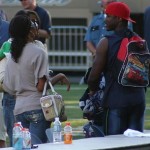 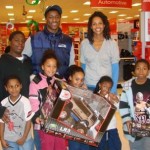 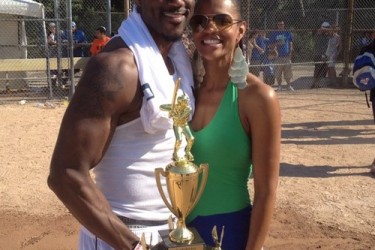 Nate Burleson is a relatively quiet #2 wideout on a high octane offense. It’s kind of surprising when you think about the numbers he puts up in Detroit, but few people outside the Motor City really knew much about him. Burleson clearly has a marketing mind, as he knew that a simple car crash while reaching for a slice of pizza was one way to put his name into the national landscape. Since the infamous pizza accident, and now moreso upon his return, he’s on a quite a few more minds, so let’s find out more about the next obvious topic: Nate Burleson’s wife Atoya Burleson.

Nate and Atoya Burleson have been together since college, at the University of Nevada. As we’ve seen time and time again, Atoya was a fellow student athlete, on the track team. The couple was engaged during Nate’s rookie season in Minnesota and have been together since. They now have three children, Nathaniel and Nehemiah and a daughter Mia.

The couple has founded the C.A.T.C.H. Foundation, whose mission statement is “to reach and teach children and their families by providing them with educational tools to succeed as well as enriching their lives by showing them how to care for others, themselves and their future.” The foundation hosts various events throughout the year, including football camps, and an annual softball game.

Let’s finish back on the pizza. Nate has kept a great sense of humor about the whole event. Following the wreck, Burleson recalled his reaction to MLive.com:

What’s funny is, my wife went to go take pictures of the car, and she said there was pizza all over the bottom floorboard of the passenger seat. Told her she should have brought it home. 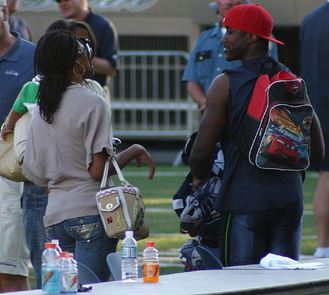