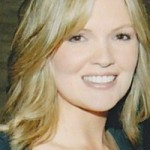 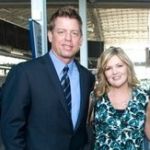 So, then let’s talk about Capa Mooty first!

Well, first things first, Capa isn’t really her name.  No, folks, Troy Aikman’s wife’s real name is Catherine Moody.  Troy and Capa met in 2016, before marrying in 2017.  Troy and Capa got engaged at Lake Como in June, and married just three months later.  Hey, when you’re in your 50’s, there’s no reason to wait around and date for years on end.

Both Troy and Capa each bring a pair of kids into the marriage.  Troy has two daughters with his first wife Rhomda Worthey.  More on her in a moment.   Capa has two sons from a previous marriage.  This modern day Brady Bunch is lovingly referred to as #teamsix by Troy across social media.  The kids are all close in age, and attend the same private high school in Dallas.  It’s not entirely clear how these two met.  But you can connect some dots when you consider that the boys’ grandmother is Jerry Jones’ sister.

Troy is not afraid to pronounce his happiness and love on the ‘gram. He celebrates most monumental occasions with Capa online.

I love you. I love us. I love our family. Happy anniversary to the❤️of my life!🎈

Troy and Rhonda Aikman began dating in 1998 (more on that in a minute), and were married on April 8, 2000. Rhonda has a daughter from a previous relationship, and together Troy and Rhonda have two more daughters, born in 2001 and 2002. The couple announced their separation on January 24, 2011.

Before we say anything, I’m giving credit to The Big Lead for finding this and passing it along.

Rhonda Aikman was working as a publicist for the Cowboys when they met in 98. Apparently, she was dating someone else. We’ll let Bart Hubbuch of the NY Post continue the story from there in a series of three tweets:

“Little story: I covered the #Cowboys in ’98 when a certain QB’s soon-to-be-ex-wife was a team PR secretary engaged to a team accountant …”

” … certain QB lured team PR secretary away, she gave ring back to team accountant, who then challenged QB to a fight in the parking lot …”

When later asked about the validity of this story, Hubbuch responded:

“Every word of it true. Saw some of it with my own eyes. The accountant literally wanted to kill the QB in question.”