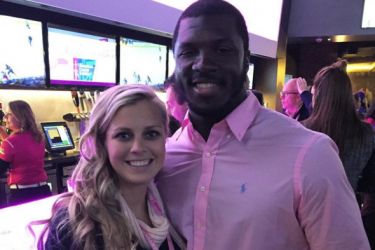 Tony Steward’s girlfriend Brittany Burns passed away on February 2, 2016. She died of ovarian cancer. We at Playerwives would like to offer our condolences. When this happens to any young couple it’s always sad. It looks to me like Brittany was such a cool lady. Tony was very expressive about how much she meant to him. It was only a week ago that she was sending out messages on her Instagram about fighting against her affliction. Those messages represent a clear will to go on living. Seeing real examples of a human’s will to live is a poignant reminder of the fragility of life.

Very soon after Tony and Brittany learned about her cancer, he proposed to her. It no doubt put their life together into clear focus, and Tony was very clear to her about how much she meant to him. After she passed, Tony Steward shared a message to her:

“You have the biggest heart I have ever seen in my entire life and I promise you that it will live on in me, our family and every single soul you have touched.”

Tony Steward’s girlfriend only just had moved into a house with him in 2015. It was less than 7 months ago that they took a picture of him giving her a piggy-back ride with her holding the new house keys. They’d also just got their first pet, a cat named LV.

Tony Steward’s girlfriend Brittany said of the past year: “But while 2015 was good, I’ve got to beat it! I’ve got to beat the only news that brought 2015 down, cancer.” Yep, cancer tends to put a damper on one’s year. It’s very difficult not to see Brittany as a victim, but I doubt she’d want to be seen in that light. She focused strongly on always fighting, and one of her favorite sayings was “fight like a girl.” I’m not sure exactly what that means, but it’s plainly obvious she fought hard. It’s plainly obvious how much heart she had.

Hope when you take that jump, you don’t fear the fall Hope when the water rises, you built a wall Hope when the crowd screams out, they’re screaming your name Hope if everybody runs, you choose to stay Hope that you fall in love, and it hurts so bad The only way you can know is give it all you have And I hope that you don’t suffer but take the pain Hope when the moment comes, you’ll say I, I did it all. I, I did it all I owned every second that this world could give I saw so many places, the things that I did With every broken bone, I swear I lived. A true definition of how life should be lived and you did that @bburns Even in your weakest moments you were thinking of ways to help other. You will continue to inspire the world. I ask that everyone please follow the link in my bio and help us to continue raising awareness for ovarian cancer research. #fightinglikeagirl #fightlikebritt #cancersucks