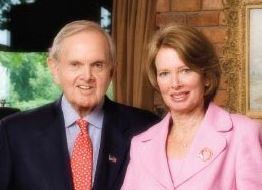 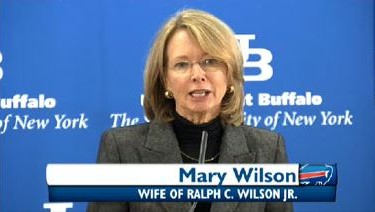 Ralph Wilson’s wife Mary Wilson was at the side of her husband when he passed away on Tuesday, March 25, 2014.

News of Wilson’s passing spread quickly at the NFL Owner’s meeting. Roger Goddell informed all the league owners of his passing shortly before the media was told. Bills President and CEO, Russ Brandon handled much of the news delivery, informing the Buffalo News, “He passed away peacefully at his home with his beautiful wife, Mary, and his daughters by his side.” He later released a statement saying, “No one loves this game more than Ralph Wilson. It’s very tough. What he’s’ meant to the entire organization. He’s our leader, our mentor our friend. How he loves his players and loved our community. Special guy. They just don’t make them like Ralph Wilson.”

Mary Wilson is Ralph’s third wife, after the couple married in 1999. Wilson was also survived by daughters Christy Wilson Hoffman and Edith Wilson. He is predeceased by daughter Linda Bogdan, who died in 2009. The Buffalo Bills are expected to be placed in a trust, until the team can be sold as Wilson made it clear he would not be leaving the team to his family.