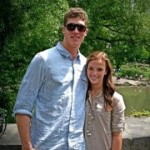 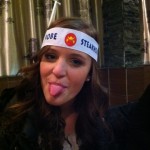 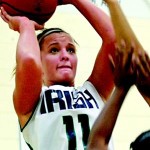 If there is one thing that can get you drafted in the NBA without much talent it is height, famously backed up by the old saying which goes something like “you can’t teach height.”

Case in point for the 2012 NBA draft might be Meyers Leonard. Leonard is a 7’1″ center out of the University of Illinois who is projected to go anywhere from 8-16 in the draft. I laughed when I read one draft expert say his best case comparison would be Tiago Splitter. I’m thinking any NBA lottery team that takes Meyers is hoping he turns out to be a little better than Tiago who is nothing more than a serviceable big man. Regardless of how the draft turns Meyers does have one advantage over most draft prospects, a very attractive girlfriend.

Meyers Leonard is dating Elle Bielfeldt, and while we don’t know if she will attend the draft with him we can certainly keep our fingers crossed she does. The little background we have on Elle is that she was a decent basketball player herself in high school where she attended Peoria Notre Dame and racked up over 1000 points during her career. While she could have attended college to play basketball her heart was always set on attending the University of Illinois, so Elle turned down basketball offers and went to school there where she is currently in the class of 2014. So we do know that the couple both enjoy basketball, which is good since that will be Meyers’ career for the next 10+ years. Along with playing basketball Elle was top 25 in her class and a member of National Honors Society. 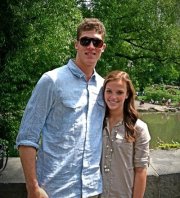