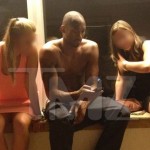 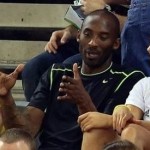 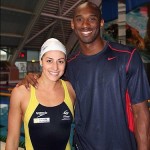 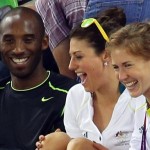 The 2012 Olympics have been great for Kobe Bryant. He has been far and away the most visible of the 2012 USA Basketball off the court while he takes in various events with his family. He’s been seen at swimming events, track and field, and gymnastics events, helping show his daughters a memorable Olympic experience. But if the rumor mill has any credibility, there’s been plenty of action off the court for Kobe as well.

Yes, Kobe has also been taking part in the nightlife London’s been offering, though Vanessa hasn’t been quite as visible with him as she is during the day. TMZ released a picture of Kobe with his shirt off in a club in between two women not named Vanessa Bryant during the opening weekend of the London Olympics. Their report indicates that a full drink was spilled(?) thrown(?) at him, and he had to take the shirt off. Whatever the reason, it certainly challenges any nothing of a reconciliation between Kobe Bryant and wife Vanessa Bryant in order to avoid their pending divorce.

However, despite all of this; the questionable shirtless nightclub incident, the public sightings of Kobe being a great father and husband, and oh by the way, helping Team USA run through the Men’s basketball bracket,… rumors are surfacing that he’s had time for even more. TerezOwens.com is reporting that Kobe Bryant may be dating Australian swimmer Stephanie Rice. Their report suggests that there were whispers of the two hooking up during the 2008 Beijing games, and that they have reconnected in London. Early in London, Kobe was seen taking in the Australian swim team practice, after which he and Rice, who is no stranger to controversy herself, posed for a picture together. After Rice and Bryant showed up trackside to see an indoor cycling a week plus later, the rumor mill started churning again, suggesting that the couple may be dating in London.

So, if the rumor mill has any credence, it’s Vanessa by day, and Rice by night. Color us jaded in regards to this rumor, as it would be a shocking turn of events to see these two be so public with their alleged affair. Both Rice and Bryant have a somewhat sordid history with various relationship failings and if they wanted to hide something, being together in public seems like a poorly laid out plan. Unless Kobe and Vanessa are officially kaput and just negotiating divorce details while remaining publicly amicable , we’re going to file this one away as bogus.

Can’t a dude rumored to have been involved in a significant amount extramarital affairs just be really good friends with one of the hottest (and craziest) international athletes in the 2012 Olympics? 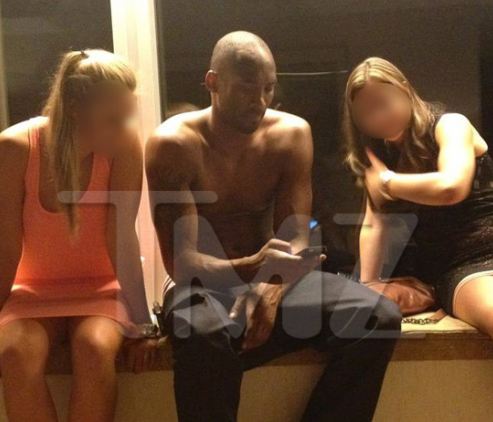