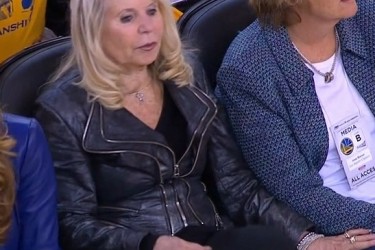 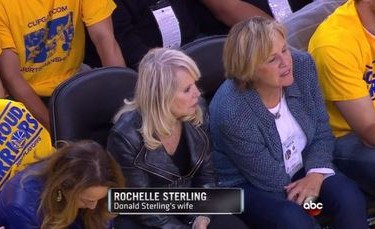 “Our family is devastated by the racist comments made by my estranged husband. My children and I do not share these despicable views or prejudices. We will not let one man’s small-mindedness poison the spirit of the fans and accomplishments of the team in the city we love. We are doing everything in our power to stand by and support our Clippers team.”

Now here’s where this gets weird. Just a few hours after releasing that statement, Donald and Shelly were seen leaving Flemings Steakhouse in Los Angeles. Figuring there’s plenty to talk about, them being together isn’t impossible to see happening. But when the paparazzi asked Donald Sterling if he was a racist, Shelly shouted out “OF COURSE NOT.” She repeated the same “OF COURSE NOT,” when asked if the accusations were true, before saying what sounded like that the tapes were altered while climbing into the drivers seat (audio isn’t perfectly clear).

This is bound to continue getting weirder before a resolution comes to pass.

Lost in the midst of the latest racially charged controversy with Clippers owner, is Shelly Sterling, the wife of Donald Sterling.

Donald and Shelly Sterling (Rochelle Sterling) were married in 1957, and despite nearly 50 years of married life, the couple parted ways. They are not officially divorced, and given the significant property and assets that would need to be sorted, may very well just work better for both parties this way. The couple had three children together, Scott, Chris and Joanna Sterling. Scott Sterling was found dead on January 1, 2013 from what was reported as an apparent drug overdose at an apartment owned by Donald.

Though still legally married, Shelly knew full well of the woman in the infamous tapes, Donald Sterling’s girlfriend V Stiviano. Forbes Magazine reports that fights between both Sterling’s and Stiviano were common and public at Clippers home games. In March, 2014, Shelly Sterling filed suit in Los Angeles Court against Donald Sterling’s girlfriend V Stiviano on behalf of the entire Sterling family. The suit was filed to recover more than $1.8 million in the form of a duplex, Ferrari, Range Rover, and two Bentleys. For her part, Stiviano has claimed that every item in the suit was given to her as a gift from the Clippers owner.

During the first game since the audio was released, Shelly Sterling sat courtside wearing all black in support with the Clippers players. Though she refused to be interviewed live during the ABC broadcast, Shelly wanted to make it abundantly clear that she does not share her estranged husbands world views and is absolutely NOT a racist telling Lisa Salters, “I am not a racist. I do not condone the things you heard on that tape.”.

There is sure to be more on this story as it develops, and we’ll try to follow details as best we can. 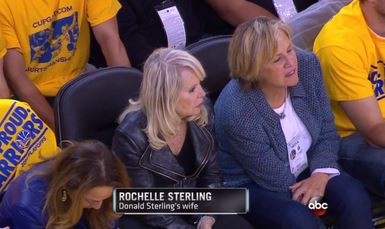