When you’re Klay Thompson, life is good. And Klay Thompson’s girlfriend history shows that life can be as good off the court as it is on the floor. Thompson is lucky to come from an NBA pedigree. His father, Mychal Thompson, helps him navigate the pitfalls that being an NBA star brings. And while Klay has had his share of female attractors, it’s never devolved into scandal. Something to be said for that.

We’re actually apparently in ex-girlfriend territory on this one, even though the whole relationship flew under the radar.  MediaTakeOut has the scoop on this one, saying

NBA star Klay Thompson may have messed up big-time. According to folks in the know, actress Laura Harrier – now one the most beautiful women in Hollywood – dumped him.

It’s not clear exactly WHAT Klay did do get himself FIRED . . . but it’s a wrap.

Klay and Laura had been dating for a little more than 6 months, according to one of Laura’s gal pals.

The entire relationship went unknown, which is an impressive feat unto itself for two people of this caliber.  But, for those who need a more formal introduction, please meet Ms. Harrier.

are you sick of my robe selfies yet yes or no? 💎 @bulgariofficial

don’t talk to me or my son ever again.

According to the TerezOwens tipline, yep… he sure is.  There’s not much to this one, other than this nugget from Terez:

This comes to us via our tip box. “Klay’s summer 2018 is another IG jersey chaser. Her name is Michelle. She deleted her video from yesterday of the two partying at Hyde for a BET after party. Can someone please help him find a wholesome lady?” I remeber Klay partying with this girl right after they won the ship last week, checkout more of her below.

They got the line on an IG model named Michelle J Mac.  Is this the right one?  We’ll keep an eye on it

On August 8, 2017, news started buzzing. The first news source to notice something was The Mercury News. Abigail shared a picture of a countertop with a bunch of basketballs on it. She also shared a picture of Klay’s dog, Rocco. Abigail said she hadn’t slept that well in a year. Very cute, very clever.

My only question: is Klay Thompson’s girlfriend actually Abigail? If not, it’s a very wily publicity stunt. If you are looking for lessons on how to acquire social media attention, Abigail is teaching! The Social Media expert is certainly an advanced professor on the topic.  At 8,000,000 followers and counting, there’s very few people who are the maven she is.

Check out my spread in the NY Post today 😎

Let’s end this story before we go further. The internet blew up with this rumor and never looked back. Klay had a party at his house, and invited a lot of people, including Cherise. At the party, he let people spraypaint a deck that he was destroying soon thereafter. Cherise, an LA Rams Cheerleader, took her artwork to Instagram. She wrote on the post “You and me baby sorry my names tagged on your patio.” She then promptly deleted the post. The internet buzzed that they were together.  For his part, Klay went out of his way to deny their involvement. Everything quieted down relatively quickly after that, but certainly the story gained traction. 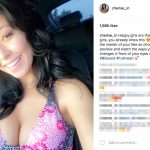 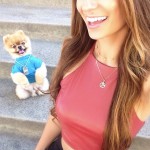 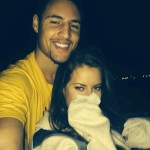 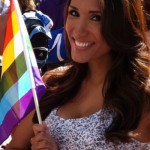 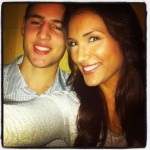 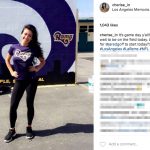 Hannah Stocking is a ten. I mean. I really don’t have much more to say about her. Stunning. Radiant. Fun. Ten. She’s the best. The two dated for about a year after his breakup from a longtime girlfriend (who we’ll talk about below). Stocking is a model with more than 7 million Instagram followers. And we’d be remiss to gloss over the fact that she carries degrees in biology and chemistry. She’s just something else. And while the science degrees are what’s going to catapult our country into the next generation, it’s a social media world. Between the Gram, YouTube, Snap and Twitter, she’s pulling in a helluva lot more than a microscope could ever do for her. Hey guys, did I mention I think she’s a ten?

Stocking is not a woman to cross. Their relationship ended in a public way, when Stocking put him on blast. She tweet-then-deleted a comment about catching him in bed with a groupie. Klay never replied. And honestly, what the hell could he say? And what groupie would be better than Hannah Stocking. You blew it, kid.

Klay dated Shaila for the majority of the early end of his career. She was a former beauty pageant contestant, who also claimed the title of Miss Pismo Beach. It was during their relationship that the infamous “allowance,” story came out. If you’re unfamiliar, the story goes that Klay’s father allowed him $300 a week after living expenses. After signing an $80m deal a couple years ago, let’s all hope pops opened the purse strings a little more.