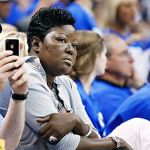 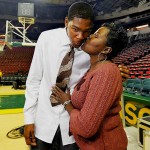 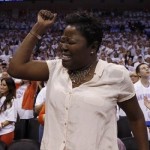 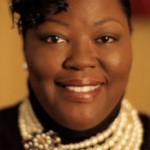 Kevin Durant’s mom Wanda Pratt first hit the national spotlight during Durant’s MVP speech. It was one of the best MVP speeches in modern history, at least in my opinion. The bulk of his speech detail the struggles of his mother, Wanda Pratt.

Kevin Durant’s mom Wanda Pratt recently appeared (played by an actress) in a Lifetime movie. The movie chronicles her struggle raising Kevin Durant. Well, if you like Lifetime movies about mothers who endure shitty lives and raise incredibly talented basketball players, you have just hit the jackpot. You remember that MVP speech I mentioned earlier? During the speech, Kevin struggled like crazy to hold back tears while talking about the struggles his mother went through for him. A fairly touching moment also touched Lifetime enough to offer her a deal for a TV show!

The personal biographies of NBA athletes tend to follow a script. Using this script, you can understand the narrative at work with Kevin Durant’s mom Wanda Pratt. She left his father when Kevin was one year old. She took him and his brother Tony far away and raised them herself. Then, she introduced him to a guy named Taras Brown, and the origin story of a superstar slowly formed. Guess what? I’m not going to watch the “The Real MVP: The Wanda Pratt Story,” but there better be a shot of a bony ten year-old Kevin working on his game while a vigilant Wanda Pratt looks on and says “Excellllent” with the voice of Mr. Burns from The Simpsons. Okay, that probably didn’t make the final cut. But it would be amazing if it did.

Kevin Durant’s mom Wanda Pratt has said that when her sons were born, she felt it was her duty to ensure they would become strong men. Those are literally her words verbatim. Based on that, you can understand that Wanda is well-spoken, well-tempered, and strong. I have to admit, I like this woman quite a lot. All jokes aside, she’s got a really calm, thoughtful, and reassuring presence in all the interviews I’ve seen her in. I hope Lifetime gave her a good deal for the rights to her life. Wanda Pratt is often seen sitting court side at her son’s games – something that she certainly earned. 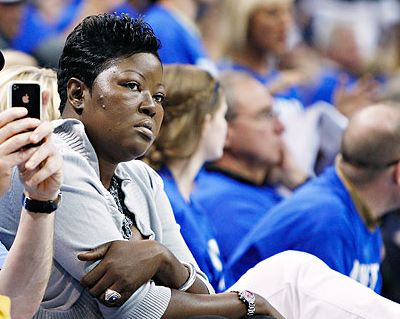