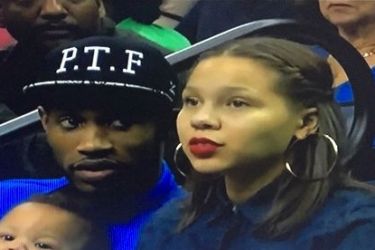 Here’s another magical case of close last names. If Will Barton’s girlfriend Jessica Burton married him, would anyone even notice? So now that we’ve established their last names are a near perfect match, let’s now delve into their personal relationship like peeping skaghounds.

Jessica is a graduate of The University of Memphis, which I myself have seen in my travels across these great states. Will Barton’s girlfriend is originally from Cordova, Tennessee and earned a bachelor’s in Interdisciplinary Studies. She became the mother of Will’s child in the summer of 2014, an event that Will described as joyous from the moment it started. He said everyone in the room was very serious and sterile while he immediately began telling jokes and playing with his son, Wyatt. It’s a charming way to describe a the scene. I’m sure Jessica appreciated his energy and presence. Some professional athletes don’t even get a chance to attend their son’s birth.

I suppose it’s also worth mentioning that the internet has spoken about Will and another woman named Kiidiosa who Will had allegedly been seeing as well. There were formerly pictures of both Kiidiosa and Jessica on Will’s Instagram account, but he deleted them. That’s a smart move. You don’t want websites that talk about who pro athletes are dating to see them! Anyway, it seems apparent that Will Barton’s girlfriend Jessica Burton is the main attraction in his life. She’s the main focus. Since they have Wyatt together, she’s a part of their family unit. Other than all this, Jessica tends to stay out of the limelight. They’ve been spotted one time by local Memphis News attending a Memphis Tigers basketball game. Wyatt was with them as well. If you want to go to a basketball game and you’ve got a kid, he’s going to. There’s always the chance that they’d hire a babysitter, but then you’ve got to worry about getting sued by them.