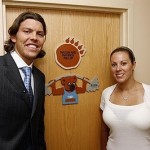 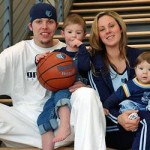 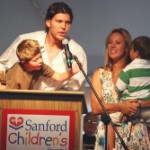 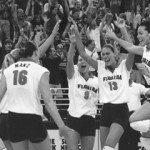 UPDATE: 05-25-2011: Mike Miller’s wife Jennifer gave birth to their third child, Jaelyn Miller, just over a week ago. There were complications during childbirth that resulted in Mike Miller’s daughter Jaelyn spending the last week in the ICU fighting an undisclosed illness. During game 4, Miller wore pink shoelaces in Jaelyn’s honor, along with a promise from Heat president Pat Riley that he would pay if NBA fined Miller for a uniform violation. After the Heat’s game 4 win in Chicago, which put them up 3-1 in the series and a virtual lock for the NBA Finals, Miller spoke about the situation, saying “She’s still in ICU. She had some complications. But it’s going to be all right. She’s a fighter. She’s the most important thing I’m thinking about right now.” Judging by Miller’s performance in that game, I think it’s safe to say that he’s comfortable that Jaelyn Miller will be fine.

Mike Miller’s wife Jennifer Miller (formerly Jennifer or Jenni Keene) met the basketball star while attending the University of Florida, where she played volleyball (contrary to what you might read, she was an All-American in high school not at the U of F). Jennifer Keene was born in Italy, then lived in Georgia until she was 8 and finally moved west to Lodi, CA with her mother before attending the University of Florida for college (and to be closer to her father). Jennifer’s mother, who lived in California, wanted to make sure that her daughter would be able to call her whenever she wanted while away at college in Florida. To ensure there was never anything to prevent this, her mother purchased an 800 number so that her daughter could reach her at any time for free. Pretty impressive. Mike and Jennifer’s first date was on Halloween his freshmen year. After dating throughout college, they were married on July 5, 2004 at the Atlantis Resort in the Bahamas. Their first son, Mason Ace Miller, was born on October 22, 2002 and was soon followed by their second son, Mavrick Mayz Miller, on July 2, 2004. Mike Miller’s daughter, Jaelyn Miller, was born on May 20, 2011.

Mike Miller and his wife Jennifer are incredibly generous with their money, donating over $1.5 million to the Sanford Children’s Hospital in Sioux Falls, South Dakota, the Make-A-Wish Organization in both Tennessee and South Dakota as well as the Houston High School Athletic Program in Collierville, TN (where Jen was head coach at the time). 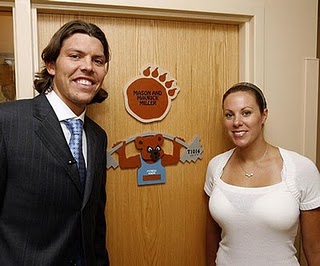