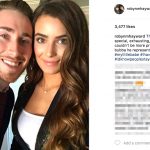 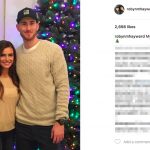 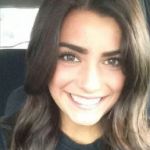 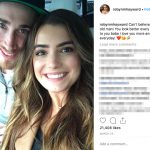 Gordon Hayward’s wife Robyn Hayward lives in Utah with her husband and two young kids. They named the kids Bernadette and Charlie, and they are both little girls. Robyn gave birth to Charlie in July of 2016. The couple also own a charming young German Shepherd named Siber. Back when he was with Utah, they lived near the town of Murray.  How do we know?  Because Robyn sometimes went to a gun range there to blow off steam. The couple also spend time in San Diego when the off-season rolls around. Robyn specifically mentioned they live in both Utah and San Diego. She even travels to Indiana to see her hairdresser! This hair loyalty never ceases to amaze me.

By now you’ve seen the video.  Poor Gordon Hayward.  He clearly didn’t want to do the gender reveal, because this exact possibility was laid out.  The father of two girls knew what was possible.  And,… well… just watch.

In January we will be adding another baby to the family and we couldn’t be more grateful! Three babies in three and half years has me thinking we’re crazy, but our lives are already crazy so what’s adding another baby!😬😂💗 #noneofthemwereplannedlol

We’ll let Gordon explain it in his own words from his personal website.

A lot of people thought the whole thing was staged, and that I already knew that we were having a girl. I didn’t. I had no clue. Not only that, but up until that point, I had this strong feeling that we were having a boy. I love my daughters and being their father. Still, there was just a part of me that wanted to have a boy, mostly because as a man, there are certain things you can relate to with a boy that are just different. You have this vision in your mind of guiding your son into being a man, of helping him follow in your footsteps, and teaching him all the things you’ve learned.

And for whatever reason, I had kind of convinced myself that’s what we were having. So when I found out we were having a girl, I didn’t know what to say or what to think. It was a hundred percent natural reaction.

And then the whole thing went viral. What I didn’t expect were all the dads who reached out to me. I’ve gotten so many messages from so many other dads in the same position as me—who have two or three daughters—and have said, “I totally know where you’re coming from. Having daughters is awesome and I love having girls, but I had the same feelings about wanting a boy, too.”

Both Robyn and Gordon come from Indiana, originally. She posted a picture of them together on the night they first met, and Robyn joked he was able to keep her around even with a backwards hat and ugly t-shirt. I liked the t-shirt. It said “Life’s a beach.” Robyn loves to leave the house when Gordon comes home to hang out with the kids. She loves freedom since she is a stay at home mom. She often makes jokes about how she runs off immediately after he comes home. Gordon Hayward’s wife seems to not get a lot of opportunities to go out and adventure in the world. So any time she gets a moment of freedom, it’s welcome.

In October of 2016, Robyn traveled to New York and shopped like a madwoman with her friend. Gordon Hayward’s wife posted a picture of all the bags they carried after they finished, and it was a heap! She joked that she may or may not have passed her shopping budget they set for themselves. Hey, she gets stuck at home all day while he plays basketball. Gordon is pays for the goodies since she has to take care of the kids most of the time! A shopping spree is always welcome for Robyn!

Celtics fans have had a rough season after watching their prized free agent go down 5 minutes into the season.  Fortunately for us, Robyn Hayward was able to provide a critical update to keep #Haywatch in full swing.  Robyn was able to give fans a glimmer into what we’ll eventually see.  Gordon Hayward shooting.  A beautiful sight for all of us indeed.  Thanks, Robyn!

During the Celtics 2020 playoff run, a lot was made about whether Stache Hayward would be forced to exit the bubble.  Gordon Hayward’s wife was due to give birth to their fourth baby during the reconvened bubble playoffs, and most expected dad to head home to be there.  Unfortunately, after a gnarly ankle injury in round one, Hayward missed most of the first two rounds.  He ultimately decided to stay in the bubble quarantine with the team when Robyn gave birth to Gordon Theodore Hayward V.

Our little man is finally here! This is Theo, Gordon Theodore Hayward. If you ask @gordonhayward his name is GT, but if you ask me and the girls his name is Theo. I miss you bunches @gordonhayward and can’t wait for you to meet him. We’re ready to watch you tonight!💚

Bubble baby finally adds another male to the Hayward household.  But don’t forget no matter what… 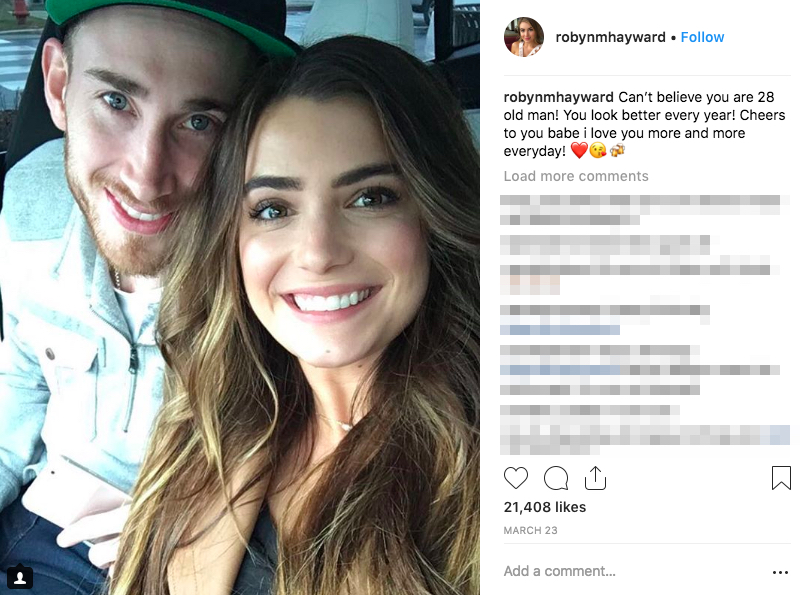