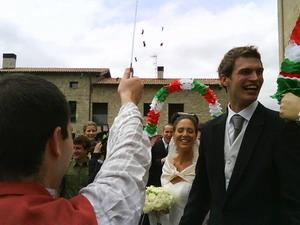 Tiago Splitter’s wife Amaia Splitter dawned a white dress on July 3rd, 2010 and joined her husband at the altar. Presumably Tiago met the former Amaia Amescua Vitoria while Splitter was playing in Spain, as her hometown is Victoria, Spain. Their first child (son Benjamin) was born in August 2012.

If the Spurs dynasty run is to continue, one of the pieces they will have to replace sooner than later is Tim Duncan. Timmy’s minutes are way down as the team tries to keep him fresh for the playoffs. Which great foresight, San Antonio just might have drafted Duncan’s heir apparent when the took a flyer on Tiago Splitter.

Here was a lot of buzz surrounding Splitter when it was assumed he would declare for the 2006 draft. He ended up passing as teams were leery of the buyout price to free him from his Spanish league team. Flash forward to 2007, when the Spurs took him at the end of the 1st round. And then they waited. And waited some more. He finally signed a contract during the summer of 2010 to bring him state side and into the Spurs lineup.