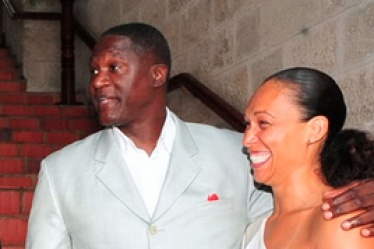 Dominique Wilkins’ wife Robin Wilkins is the proud mother of three, though Dominique himself has five children because of his other marriage to a woman named Nicole. Dominique is one of those guys that has had rumors hovering around him about fathering a boatload of illegitimate children, and many on the internet believe he stayed in the NBA for so long because he had to pay for all the paternity suits. One comment on a forum about Dominique simply read: “Dude be potent.” Indeed, internet.

Robin Wilkins herself is a lovely lady who I’m sure was given the ground rules of marriage ahead of time: please no suing me! Well, the couple has been hitched since 2006, and it seems to be working alright. Any time I see Dominique in an NBA capacity (like as a semi-host or commentator at the ALl-Star game for example) I wonder what one of those appearances pays. See, Dominique Wilkins’ wife Robin Wilkins met Dominique after his NBA career was over so it set a different precedent. Dominique was known as a guy who was “too nice” to his family and closest friends when it came to giving away money. In fact, his brother Gerald Wilkins was quoted as having told his own mother ‘I’m going to give you all gifts — that’s it. You’re not taking all my money like you did to Nique.’

As you can imagine and as it goes with most player wives and mothers of three, Robin is always busy with the kids, but she always has time to attend charity functions and things of that nature. These are usually the times when photos get snapped of her. A lot of Dominique and Robin’s closest family friends are old players from his playing days and their wives. I believe John Sally and his wife was photographed with Dominique and another couple recently. 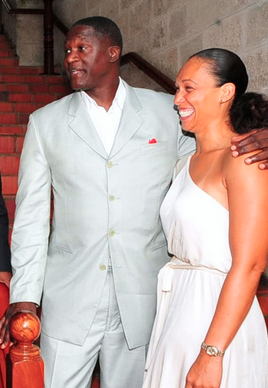