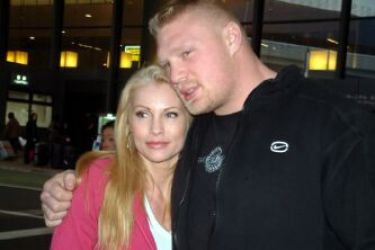 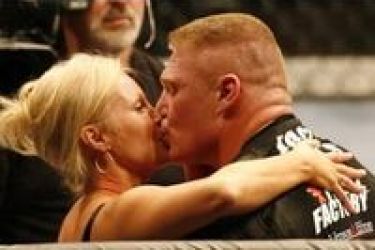 So I think everyone remembers when we first saw Brock Lesnar’s wife Sable in the WWE. Hunter Hearst Helmsley (Triple-H) came out to fight the Ultimate Warrior at Wrestlemania XII. Alongside him was some new smoking hot chick in a skin tight black dress who looked like she was ready to go. The WWE knew what they were doing when they pretty much made her one of the first “Divas” ever.

Who can forget the bikini contest that Sable had with Jacqueline? When Sable whipped off her top and had two hand print pasties on… I think all guys watching started barking like dogs. She’s obviously a little past her prime at this point but what guy in their right mind would pass on Sable in her glory days? Nobody my friend… nobody.

Brock Lesnar’s wife Sable (Rena Mero Lesnar) was born on August 8, 1967. Before having a wrestling career she was a model for L’Oreal, Pepsi and Guess?. She was the second WWE Women’s Champion ever. After she was officially divorced from her second husband in 2004 she started dating former UFC Heavyweight champion Brock Lesnar who she married eventually. That same year, Sable left the WWE to spend more time with her family. Sable and Brock eventually married and have two sons named Turk and Duke. Over the course of her career Sable has been in Playboy 3 separate times. She was the first woman in history to be given two Playboy covers in the same year. Good for Brock.

Brock has made the transition to MMA and managed to capture the heavyweight belt in the UFC at one point. He did have a scheduled fight with Junior Dos Santos after his stint on The Ultimate Fighter coming up but had to back out due to his ongoing battle with diverticulitis.

Rena Greek is her maiden name. She was first married to Marc Mero (another former WWE star) and changed her name to Rena Mero. Now that she’s married to Brock, she apparently didn’t want to drop the Mero, so she’s Rena Mero Lesnar. I mean, why not be like Dikembe Mutumbo (Mpolondo Mukamba Jean-Jacques Wamutombo) and just keep the “Greek” and become Rena Greek Mero Lesnar? 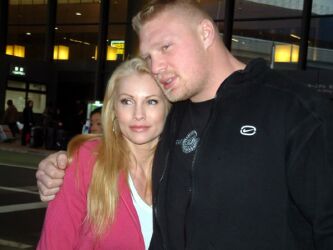