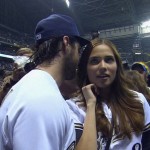 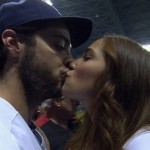 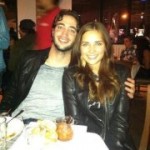 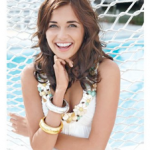 UPDATE 09/04/2014: While the last couple of year’s have been trying to say the least for Ryan Braun, things off the field have been going great. With that in mind, congratulations are in order for Ryan Braun’s wife Larisa Fraser after giving birth to the couple’s first child, daughter Celine Elysse.

Braun missed one game with the Brewers and returned the next day. With the playoff push in full swing for the Brew Crew, Braun will probably be getting a pass on the 2am feedings for a while. But come October, I’m sure he’ll have accrued his fair share….

Congratulations to the Braun’s!

UPDATE 11/07/2012: While there was never any official word, we were clearly right about these two over a year ago. Official word has come down that the couple is now officially engaged.
On her own blog, Fraser broke the news of the engagement with a small quip calling Braun her fiance, rather than a giant public proclamation:

After a fridge loading Costco Trip it was time to feed the boyfriend–fiance (I’m still not used to that) something ‘new’. DA DA DA DAAAA…

So there you have it. Official word from the source herself. Sources have popped up on other sites saying it was a low key proposal at their favorite restaurant where Braun presented her with a massive rock.

Congrats to the two and we’ll keep an eye out for wedding plans.

There’s admittedly no official word about these two, and searches for “Ryan Braun’s Girlfriend” pictures turn up nothing. Lucky for you, we here at PlayerWives.com don’t give up easily. Here’s what we have pieced together:

There are rumors that began last offseason that Ryan Braun is dating Larisa Fraser, who is a Miami based model (Braun went to college at Miami). Fraser also runs a beauty blog called Bikini Sweetie. Without substantial information, we decided that rumors weren’t enough for this post, so we went digging for more.

We began our sleuthing on the Brewers home page to see if she participated in any Brewer Wives community events, though that turned up nothing.

Braun’s girlfriend was referenced by many news sites, when his girlfriend attended the press conference following his contract extension through 2020. Later in 2011, the Brewers team owner chartered a jet for the Brew Crew’s All-Stars, which according to the Milwaukee Journal Sentinel chauffeured Braun and his girlfriend, again mentioned without a name. We’re getting no closer.

Of course, there was the moment when a female fan asked for Braun’s hand in marriage while providing her cell phone number for him to call (and apparently the whole world to call). Braun responded respectfully, but again admitted to having a girlfriend.

So we have officially established he has a girlfriend, but we’ve yet to officially establish this girlfriend as Larissa Fraser. In our sports-gossip world, we have to admit that a lot of times where there’s smoke, there’s fire, so we soldiered on with our search. We saw Larissa’s name dozens of times on other message board driven sites, and wanted our proof. After we found Larissa’s Bikini Sweetie Blog, we finally had our first picture of Braun and Fraser together.

After even more research, (OK, that’s a lie, a reader pointed us to this), Braun and Fraser were seen kissing on the field when the Brewers clinched their playoff berth. I’d call that pretty conclusive.

This is admittedly not official word whatsoever. It certainly helps our case here. We know that he has a girlfriend, and that most all signs point to the probability that Larisa Fraser is Ryan Braun’s girlfriend. However, until official word is delivered, this is nothing short of speculation. Till we get word, enjoy the pics and stay tuned. We’ll keep you posted as soon as we know anything. 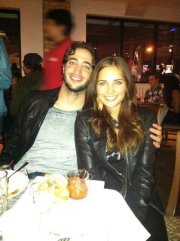