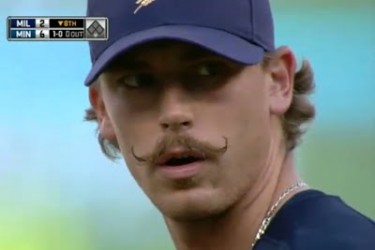 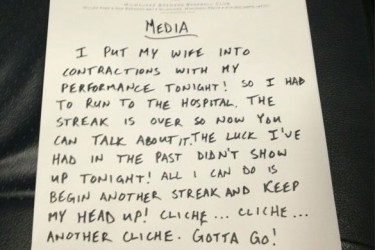 Without flinching,… John Axford is hands down, the coolest guy in Major League Baseball.

We could start and end this post with a picture of his mustache, or point you to his inspired Twitter account of @johnaxford and very few people would challenge our opening salvo,… but with The Ax Man there’s so much more.
Axford was originally drafted in the 7th round of the 2001draft, but rejected the contract in favor of taking a scholarship to Notre Dame. In 2005, he was drafted in the 41st round by the Reds, but not tendered a contract, sending Axford to the lower levels of the lower levels of independent league bseball.

While wallowing through a small semi-pro league, Axford tossed a 19 strikeout campaign in only 7 innings(that’s right, 19 of 21 outs were by way of the K) which earned him a gig with the Yankees. Unfortunately, that lasted only one season and Axford was released by the team following the 2007 which saw him bounce between low-A ball level clubs, Axford went back to his Ontario home to sell cell phones and tend bar. Never giving up on his dreams of pitching in the majors, he kept plugging at it, and was offered a shot with the Brewers the following spring. After a couple seasons in the minors, he finally got his shot during the September call ups of 2009, seeing a couple games at the tail end of the season. People in Milwaukee began noticing the guy with the cool mustache throwing smoke, and shortly into the 2010 campaign, Axford took the closer gig from Hall of Famer Trevor Hoffman and never gave it back.

Considering everything, there’s very little doubt left that he’s without question the coolest guy in The Show,… but his coolest fete came last night. Axford was on a string of 49 consecutive successful save opportunities coming into Friday, May 11 which abruptly came to a halt. Though the Brewers came back to win the game 8-7 in 13 innings, reporters still flocked to the locker room to talk to the normally engaging and candid Axford about the end of his streak, only to find him missing. Left in his place, was was only a hand written note hanging in his locker reading:

“I put my wife into contractions with my performance tonight! So I had to run to the hospital. The streak is over so now you can talk about it. The luck I’ve had in the past didn’t show up tonight! All I can do is begin another streak and keep my head up! Cliché … Cliché … Another cliché. Gotta go! Love, Ax.”

John Axford’s wife Nicole is not due until June, so there was a sense of relief when Axford informed the team that even though Nicole will remain admitted to the hospital for a few days, the contractions had stopped. The couple had their first child in June of 2011, when John Brian Axford was born. In an interview with MLB, Axford had a candid, insightful view on fatherhood:

“It’s instant love, and you can’t get anything greater than that. I guess you kind of expect it, but it’s never what you anticipate. That’s what I’m feeling. It’s definitely a lot stronger emotional bond than I thought it would be.”

The locker note, the quote, the Twitter, the mustache, the journey…. does anyone want to contradict that he’s the coolest guy in baseball? 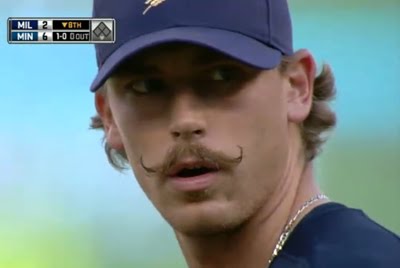