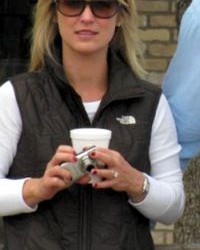 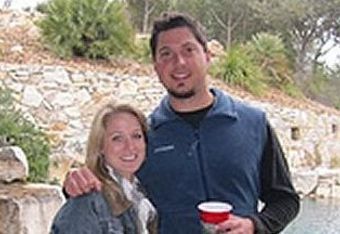 UPDATE 09/24/2014: In a season that may prove to be the end of the line for Josh Beckett, we decided to take stock of what’s waiting for him off the field.

By now, we all know about the (literal) rocket scientist that is Josh Beckett’s wife Holly Fisher. But when we last checked in, the couple were just getting started on having a family. And the Beckett paid has since expanded to the Beckett four, with daughters Ryann and Sage on board.

Beckett has plenty to celebrate from his playing days and more to celebrate outside the lines. If this is the end, congratulations to the playoff bulldog.

UPDATE: After getting married in Vegas in February, as planned, Josh Beckett and wife Holly Beckett are getting to work on having a family. According to the Boston Herald, Holly is due with the couple’s first child in the fall. For Red Sox Nation’s sake, and probably Holly’s sake while she’s expecting, let’s hope he’s nor born during the playoffs. Josh gets a little intense, and I don’t think he’d be the greatest delivery room coach.

Josh Beckett and his wife Holly Fisher were engaged while attending the Daytona 500 in February, 2010 and were married on February 1, 2011.

So who exactly does a nasty, fire breathing, fire ballin’, mean ol’ Texan like Josh Beckett ask to marry him?
The answer might surprise you. After putting together a fairly solid big league tail resume, Beckett returned to his roots. Holly Fisher is a member of the Spring High School Class of 99 (same as Beckett). She went on to earn a degree in Aeronautical Engineering before getting a job at Boeing while she pursued her masters degree in the same field. She currently works as a space engineering consultant for a company on the west coast and has her pilot’s license. That’s right,… Josh Beckett is about to marry a rocket scientist, in every literal sense of the word.

So everyone remembers the Brian McCann wedding registry debacle (though his Mrs. Brian McCann’s mother is a sweetheart of a woman, and I’m not being sarcastic). Well, even though he’s a Red Sox, we’d be remiss to not poke fun at the Beckett-Fisher registry.

After signing a 4 year $68 Million dollar deal earlier this spring (which he’s currently doing a bang up job of earning (and I sadly have to clarify that I am being sarcastic here)), the couple has registered for the following item’s: Gift cards to Macy’s, Bloomingdale’s, JC Penney’s and Amazon.com. Seriously. Gift cards. That’s it.

Now, I’m going to pull back the curtain here for a second and reveal that both of the guys running this site are engaged (and to be clear, we’re engaged to women that are indisputably hotter and cooler than we deserve, and no, we’re not engaged to each other). I think that Josh Beckett has given us a great idea, because seriously, who uses a gravy boat? Wouldn’t it be better to just get cash towards what you want than to register for towels? At first, I thought the idea was tacky, but I’m all the way in on this one. Like in the 07 playoffs,… thank you Josh Beckett. Thank you.