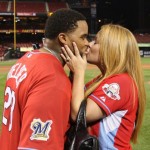 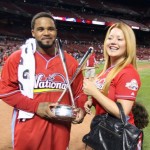 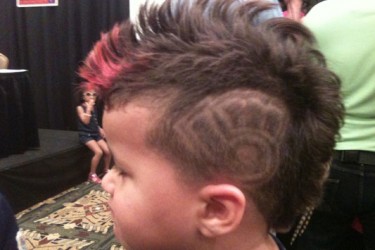 On May 28, 2013, Prince Fielder filed a dissolution-of-marriage case against wife Chanel Fielder. The proceedings have not yet played out and divorce is not finalized, but clearly on the way. We’ll keep an eye on this one (as will many single women in Detroit)

UPDATE: 07/2009: For those paying attention to the 2011 Home Run Derby, you were sure to have seen Prince Fielder’s wife Chanel Fielder on the field with him during his post game trophy ceremony and press conferences. Prince Fielder’s son, we’re actually not sure which one, was with him last night as well sporting one hell of a mohawk(and almost taking the entire spotlight away from his father). Check out the photo to the right.

Prince Fielder is a big man who appears to have a big appetite. As un-newsworthy as that sentence is to begin a paragraph, it is germane to the conversation about Prince Fielder’s wife, Chanel Fielder.

The boy who starred in a commercial for McDonald’s triple cheeseburger with his father has now become a vegetarian thanks to his wife. During the 07-08 offseason, Prince Fielder’s wife gave him a copy of the book “Skinny Bitch,” by Rory Freedman and Kim Barnouin. The book describes in detail the gnarly truths of a slaughterhouse. Prince immediately turned away from meat and began a vegetarian lifestyle at the prodding of his wife.

Many Brewers fans immediately ran out to find their nearest panic button, as traditional schools of nutrition and training have all signs pointing to a meat heavy diet in order to maintain the mammoth power Prince has demonstrated throughout his career. Have no fear, as according to Prince, “My wife said that if I lose some power, she’s cooking me a big steak.”

Prince’s power dropped slightly, from 07 to 08, going from 50 to 34 home runs. He saw a nice rebound in HR totals in 2009 again climbing to 46 HR’s, and a memorable HR Derby championship at the All Star game festivities.

Prince Fielder and his wife Chanel have two sons together, Jaden and Haven. 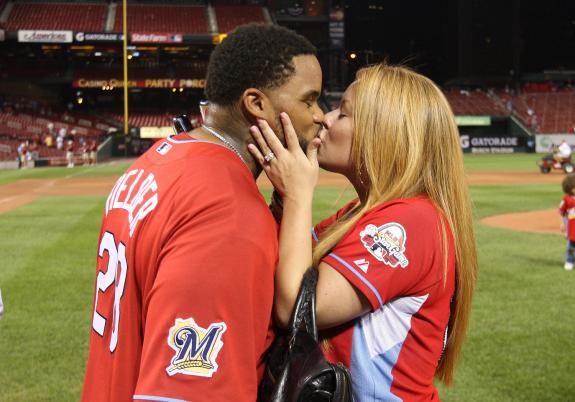