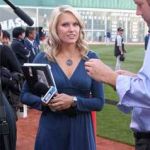 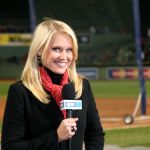 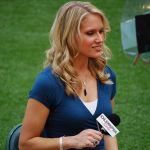 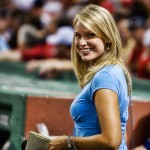 UPDATE 11-16-2011: Along with what seems like every single other member of the Red Sox, Heidi Watney has announced that she is leaving. Ms. Watney is leaving the Red Sox for her native California to cover the Lakers. No word on whether Heidi is leaving in part because her alleged boy toy Jason Varitek is engaged.

Though the rumors of Varitek dating Heidi Watney were never confirmed, it would appear that they are definitely not an item now, if they ever were. Now that he is engaged to his girlfriend, check out our post on Jason Varitek’s fiance.

Jason Varitek’s rumored girlfriend Heidi Watney is the NESN sideline reporter for all Red Sox games. Rumors of the two first began following what was described as “intimate conversations,” in a VIP room at a Baltimore bar following a game early in the 2008 season. Varitek’s ex wife Karen, was extremely active with the Red Sox wives charitable endeavors. The news of their divorce in 2008 surprised many in the community and the team. Rumors of Varitek and Watney’s relationship had been swirling for months prior to the divorce filings.

During 2009 spring training in Fort Myers, FL, Heidi posted a video blog on NESN.com. In the video, Watney showed a crocodile that would repeatedly climb onto the beach behind her condo to sun itself. During the video, Watney panned the camera to show the distance between the beach and her condo. In the process, Ms. Watney failed to realize that she had accidentally revealed to a legion of fans the exact street and unit of her Fort Myers condo. No word on how many Fitzy’s, Sully’s or Murph’s came knocking on her Spring Training door. The video was quickly removed.