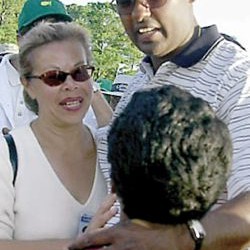 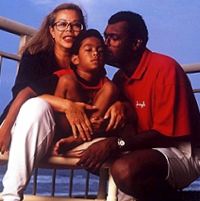 Hands down Vijay Singh is the most puzzling figure on the PGA Tour (with John Daly being in a category all by himself). He’s been around forever and won three majors, yet do we know anything about him? He doesn’t strike me as the type of guy that is hitting up the pub with Graeme McDowell or Bubba Watson after a round. When I started looking for Vijay Singh’s wife or girlfriend, I really thought this one could go anywhere. I wasn’t going to be shocked if he was single since the little we do know about him describes Vijay as a man who lives on the golf course. If I found out that Vijay was a total player, living up his nickname “The Big Fijian”, I’d totally buy it. Basically anything and everything was on the table for this guy.

In the end there isn’t any scandalous story here, Vijay Singh and his wife Arenda Sith actually seem to have a normal relationship. While we don’t know when they began dating, the couple was married in 1985, so needless to say Vijay and Ardena have been together for a long time. It’s no surprise that we know nothing about this couple, that seems to be the way Vijay lives his life. That could all stem from an incident in 1985 when Vijay was on the Asian Tour. Vijay got caught changing his score at a tournament so that he could qualify for the weekend. Vijay adamantly denies this and has blamed the son of a politician who might have changed the score on Vijay’s behalf without Vijay knowing. Regardless, Vijay was suspended and went into exile with his wife Ardena. Vijay and Ardena survived with Vijay being a golf pro at random courses in Asia trying to buy time until his playing privileges were restored. To this day the event is a sore subject with Vijay and he very rarely talks about it. Vijay and Ardena have one son, Qass. 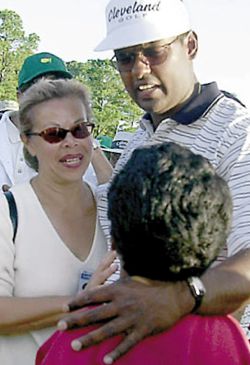