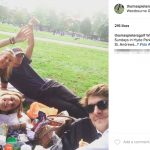 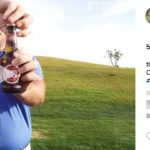 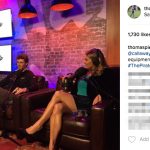 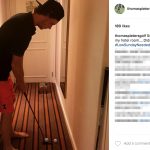 Thomas Pieters’ girlfriend Eva Bossaerts is a Belgian lady who travels around with him to various tournaments. I’m telling you, the golfer dating lifestyle is pure joy for women without kids. There is no better way to see the world since all the golf events take place in nice places. No one figured out or mentioned Eva used to figure skate competitively. Because of her background in that sport, she maintains a great physique. She competed in the Belgian Championship of figure skating from 2006 to 2009.

Eva loves to travel to the tourneys. Thomas Pieters’ girlfriend went to the Ryder Cup in 2016 and people spot her on the sidelines from time to time. She does keep a low profile because she prefers to stay behind the scenes. However, she does hang out with Thomas’ family quite a bit as well. For a moment, I thought she attended The Pirate Ship Show podcast at the Callaway Golf Headquarters. However, that’s just the co-host who looks like Eva. When he was on the show he mostly just talked about golf and other golfers. He is a cool guy, though, and I can tell how competitive he is. I also thought for a second Eva showed up for a Golfing World interview, but it was Anna Whiteley, who works for Golfing World. Maybe I have trouble distinguishing blonde people apart?

Anyway, Thomas never posts any pictures of Eva on his social media! He certainly appears to prefer things stay private. Thomas Pieters’ girlfriend does have social media accounts, but like I said- she prefers to stay out of the limelight. I do have a sense of the kind of styles she likes because I took a look at her Pinterest account. Overall, she has an edgy taste and likes casual, rock & roll looks. She appears to like leopard print as well!