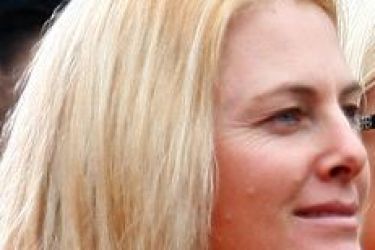 I really want this post to be about Steve Stricker’s wife Nicki Stricker.

Steve and Nicki have been together for a long time, dating all the way back to when they met in college at the University of Illinois. I planned on talking about how Nicki’s dad, Dennis Tizani, is also Steve’s swing coach and the brother of former PGA pro Mario Tizani. Another interesting tidbit is Nicki, who grew up around the game because of her dad, caddied for Steve during the first 5 years of his career. Her caddying career only ended upon the birth to their first daughter.

Despite all the interesting angles to take talking about their relationship, I can’t get the image of Steve totally bombing during the 2012 Ryder Cup out of my head. There is a lot of blame to go around for that embarrassing loss but at the top of that list is the guy whose on his wiki page declares him “Mr. September.” Must have been the Europeans who gave him that nickname. Many people want to point the finger at Tiger Woods but Tiger was playing 2 on 1 with Stricker as his partner. Hell, I’m an 18 handicap and I would have been a better partner for Tiger. No one was happier to hear Steve is going into a semi-retirment than me but I only wish he did this last summer and didn’t cost his country.