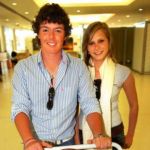 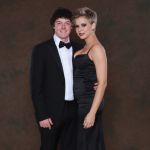 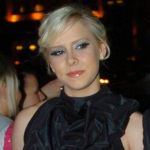 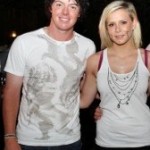 UPDATE: Based on her Twitter account (HFCSween) and various reporting by other media outlets, it seems safe to say that Rory McIlroy and Holly Sweeney are still dating. Also worthy of note is that she refers to him as “the curly one”. She could call me whatever she wanted…

Rory and Holly have dated for more than 5 years, beginning when Rory was 16. In January, 2011, McIlroy revealed that the two had decided to take a break, though shortly thereafter acknowledged they were still talking on a daily basis. Rory made it clear through the press that the two still loved one another and knew what they wanted in life.
Fast forward to the 2011 Master’s tournament. The self-publicized single McIlroy ran up a 4 stroke lead after 3 days. Headed into Sunday, Rory’s management team secretly flew Holly into the Augusta area to have her waiting to celebrate with him after the 18th hole. However, after a disastrous 8 over par final round 80, McIlroy lost the green jacket to Charl Schwartzel. As Rory dejectedly walked off 18, he lit up when seeing Holly waiting off 18.
No word on their relationship status as of today’s US Open final round, and Rory’s incredible wire to wire victory 8 stroke victory. We are watching the wire to see if Holly shows up in any celebratory photos. 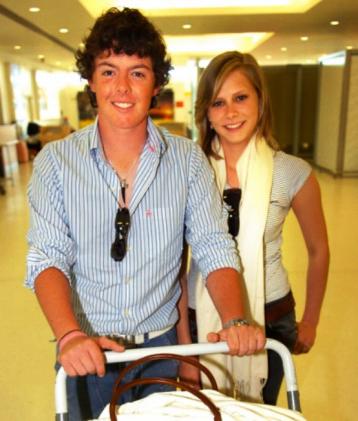