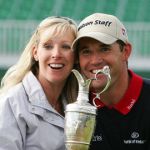 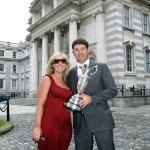 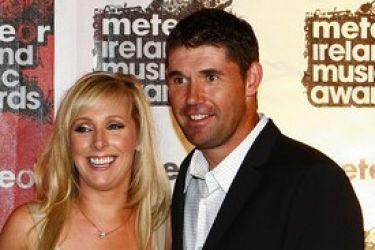 Padraig Harrington’s wife Caroline Harrington was living in Dublin, Ireland when her father took her to see a junior golf match in which Padraig was playing. Padraig says it took him 6 months to ask her out after meeting at the match, but they began dating and have been together ever since. The pair were married in 1997 and have two sons together, Patrick, born in 2003, and Ciaran, born in 2007.

Padraig Harrington’s wife Caroline’s cousin, Gerard Byrne, was in an auto accident recently and paralysed for life. Padraig, in an attempt to help fundraise for Byrne, who will never walk gain and has three children, worked out a deal with his current sponsors. Under this deal, Padraig was allowed to offer up all of the advertising space on his gear for three tournaments in early 2012, with all proceeds going to help his wife Caroline’s cousin.

In an unrelated note, am I insane or does Caroline Harrington bear a striking resemblence to Jane Krakowski, aka Jenna Maroney from 30 Rock? 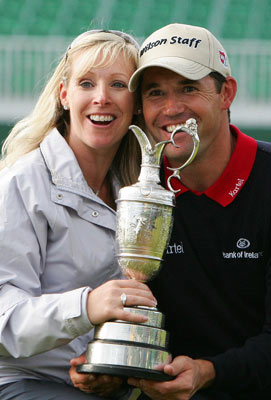