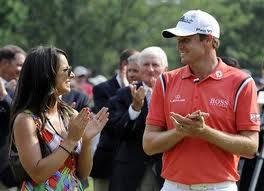 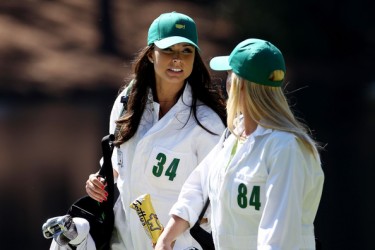 Not sure how we missed this one but we forgot to post the most important piece of info about Nick; his cousin is former NESN Red Sox girl and future sideline reporter for the LA Lakers Heidi Watney. And in this case we are not talking distant cousin, they actually grew up very tight. In an article with the Hartford Currant Nick talked about the tight relationship between the cousins,

At first it appeared Heidi would be the big star of the family with the beauty pageants and the job with the Sox but Nick shot to fame quickly in 2010 and 2011. I’d say the race is neck and neck right now. A major championship could put Nick over the top while the upcoming sideline reporter gig for the LA Lakers will be a huge step up for Heidi.


Nick Watney married the former Amber Uresti on October 30, 2010.
The Texas native Amber was introduced to Nick after her father, PGA caddy Rusty Uresti, repeatedly told her that Nick was the sweetest guy on the tour.
After graduating from the University of Texas in May of 2010, Amber began traveling with Nick full time to various tournaments. I an article with Todd Kauffman at BleacherReports, she admits she was shell-shocked by all the attention Nick gets off the course, but that it’s something she’s used to now.
2011-07-15