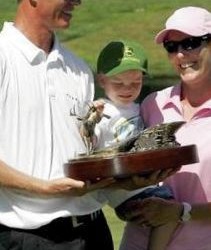 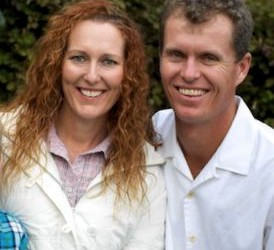 I suggest you enjoy the few pictures we have of John Senden’s wife Jackie Senden while you can. It could be because he’s Australian or simply because he’s done jack squat in his career but pictures of Jackie Senden are few and far between. I even ran through 3 years of bland Twitter posts to see if John posted any family pictures that included his wife Jackie and that would be 20 minutes of my life I’m never getting back. I actually found a few pictures of John and Jackie’s son Jacob on the Twitter feed but you don’t come to this site to see pictures of athletes’ 8 year old sons, so we will spare you those photos. Now if by some miracle John can make a run and win the U.S. Open well you can thank us for being one of the first to spotlight Mrs. Jackie Senden.

Will the 2013 U.S. Open be the tournament that sees Australian golfer John Senden finally put everything together and win a big tournament (sorry I’m not counting the John Deere Classic as a big win). He’s been described by fellow golfers as having a text book swing and demeanor to be a consistent winner on any tour but for some reason things have never clicked all at once for Senden. Having never heard of Senden myself and reviewing his illustrious career I feel pretty confident saying by the end of the third round Senden will falter. 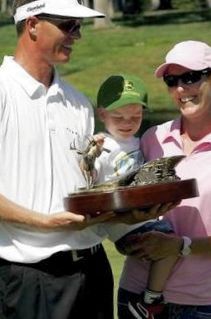