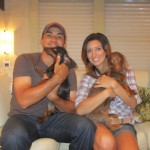 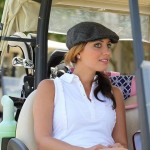 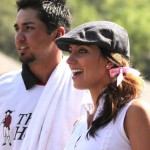 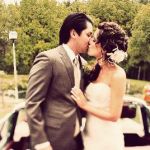 Jason Day’s wife Ellie Day was taken out in a stretcher after being bowled over by LeBron James in January.

Jason Day’s wife was sitting courtside at the Cavs with him when LeBron dove for a ball.  Poor Ellie Day took the brunt of it and was knocked over.  She was transferred to a nearby hospital and was ultimately fine, outside of concussion symptoms and getting quite the scare. Jason Day defended the fact that he did nothing to protect his wife, by saying:

It happened so quick, I’m going to do that? I’m not going to stop a 260-pound guy that’s 6-8 running full speed. Ellie took it like a champ, though.

Back before LeBron’s heinous assault

Ellie is from Lucas, Ohio and is two years older than Jason. The couple met by chance while Ellie was working at a restaurant in Twinsburg, Ohio but didn’t actually begin dating until a few years later. The couple eventually began dating thanks to an introduction by Jason’s coach/caddie, Colin Swatton. I wonder if the pair knew that they had met, prior to being formally introduced – or if they only figured that out later. It’s a strange coincidence, regardless.

Jason Day married the former Ellie Harvey in 2009. The couple lives in Ohio now, but lived out of an RV for awhile – traveling from tournament to tournament in their RV. Their two dogs accompanied them in the RV, but the RV situation became unrealistic when Ellie became pregnant for the first time. Their son, Dash James, was born in July 2012. The couple had their second child, a daughter named Lucy, in November of 2015.

On a random final note, Jason Day’s wife once competed in dairy food competitions. Can someone please tell me what in the world is a dairy food competition? Is that like the college game where you have to drink an entire gallon of milk in 30 minutes? Or is it like identifying different types of cheeses while blindfolded? Or maybe it’s like that scene in Napoleon Dynamite where he identifies the defect in various jars of milk? I really hope that’s what it is because that scene is hilarious. 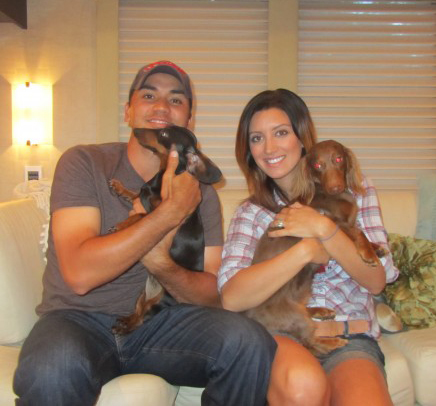