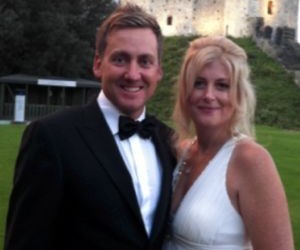 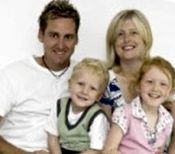 We’ve done some digging to find some info on Ian Poulter’s wife Katie Poulter and, outside of a few pictures there isn’t a lot of juice. We know her name is Katie and Ian met her while was working his way up trying to get his European Tour card. At the time, Katie was a nurse. While the couple met in the late 90’s, it wasn’t until 2007 that the Ian and Katie were married. This last January the couple had their fourth child and second boy, Joshua. The other children’s names are Luke, Lily-Mai and Aimee-Leigh.

If we had to play word association the first thing everyone would scream out if we said Ian Poulter would be crazy outfits. Ian has always been known as one of the more colorful players on the European and PGA Tour which I always thought did him a disservice. While he’s never had that big major win he’s played extremely well in Europe for a long time and always been a good match play/Ryder Cup player. The Englishman is currently in a battle to make the 2012 Ryder Cup team and his play at the PGA Championship might go a long way in making this happen.

Ian has never been one to shy away from controversy and some of it has been directed at Tiger Woods. In 2008 when Tiger was, well, Tiger, Ian made comments that if he played the way he was capable of there was no one out there outside of Tiger that could compete with him. Strong words for a guy who never has won a major. He also tweaked Tiger during his comeback in 2011 saying there was no way Tiger could finish in the top 5 of the Masters. Tiger of course finished 4th. Needless to say Ian should probably stay away from making comments about Tiger Woods in the future.