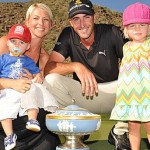 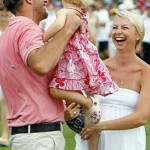 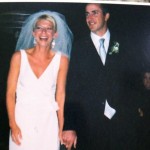 With the British Open or The Open Championship as it is commonly referred to overseas this week we thought we’d treat everyone with a little southern love.

Geoff Ogilvy isn’t a golfer tearing up the golf world right now and he’s actually been in a bit of a funk the last few years. Geoff Ogilvy’s wife Juli Ogilvy, however, never appears to be in a funk. While Geoff is from Australia, his wife Juli is actually a southern girl from Texas. Juli’s sister is the daughter-in-law of Hall of Fame Women’s golfer Judy Rankin so it would be safe to say Juli’s entire family knows a thing or two about golf.

Together the couple is actively involved in helping to cure neuroblastoma, which is a cancer that usually strikes young kids. Geoff and Juli became involved in fighting the disease when one of their friend’s daughters was diagnosed with the disease. In 2011 they hosted Geoff & Juli Ogilvy’s Charity Golf Day at the Victoria Golf Club in Australia to help raise money for research into the disease.

One interesting story is how Geoff and Juli were invited to the White House for a dinner in May of 2006. The dinner was in honor of Australian Prime Minister John Howard but the Ogilvy’s weren’t quite sure why they were invited, especially when you consider this was still a month before Geoff won the U.S. Open. Apparently someone thought enough of Geoff to put him at the head table with President Bush (Juli was put at a different table). George has always been an avid sports fan and chatted up Geoff for quite some time about all things sports. Quite a surreal night for the couple.

Geoff and Juli married in 2004, a few years before Geoff had his biggest win in his career to date when he claimed the aforementioned 2006 U.S. Open Championship. Geoff and Juli have two childeren, a daughter Pheobe, and a son Jasper.