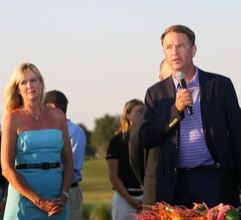 If you are a fan of the US Ryder Cup team let us all pray that Davis Love III’s wife Robin does a better job picking out the apparel than Corey Pavin’s wife did. For those not familiar with what I’m talking about let me give you a little refresher. Corey Pavin, the captain of the US team in 2010, left his wife in charge of picking the outfits for all the players during the tournament. This seems like a very simple task, probably one that anyone could handle, unfortunately, just not Mrs. Pavin. This tournament was held in Wales, where it rains all the time. The rain gear Mrs. Pavin bought was so bad the team had to go to the pro shop at the course and buy new outfits during a delay. So here hoping that Davis Love III either doesn’t put his wife Robin in charge or if he does she makes sure the waterproof gear is, you know, waterproof!

Robin and Davis have known each other since high school. Davis mentions in his book that while the couple were good friends in high school Davis assumed Robin didn’t see him as boyfriend material. That changed when Davis went to UNC to play golf. By his junior year Davis and Robin were dating. People familiar with Davis know that his father, Davis Love Jr, was a well known golf instructor. Davis Love Jr. died in a plane crash when Davis was 24. At the time of the plane crash Davis and Robin were in Hawaii. In another excerpt from his book about his father, Davis talks about how his father taught Robin how to appreciate the game of golf. Robin didn’t know much about golf when she started to date Davis.

2003 was a trying year for the couple. Robin’s sister’s husband committed suicide and there were also rumors about Davis and Robin’s relationship being on the rocks. While nothing was ever substantiated Davis himself mentioned in Sports Illustrated that the rumors floated around “Robin’s infidelity, our marriage breaking up, her being arrested for indecent exposure on a beach, and using drugs.” Seeing that these rumors are now 10 years old it appears the couple has moved on. Davis and Robin have two children, Alexia and of course Davis IV.