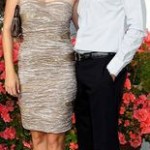 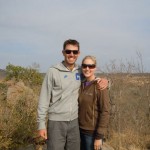 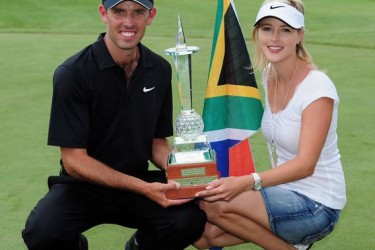 I wouldn’t often associate the name Rosalind with an extremely attractive blonde,… but I might need to reconsider my view on the name.

For those who don’t know who Charl Shwartzel is, he is the winner and reigning champ of the 2011 Masters, coming out of nowhere to win the tournament. Since then he’s played extremely well and moved into the overall world top 20 ranking on the PGA. The couple first met almost five years ago, during a rough patch for Charl. Actually, rough patch might be understating it: this was a low point in Charl’s life as he was coming off a bad breakup and his golf game was in shambles. Once Rosalind came around, things started to turn around. After winning some tournaments overseas Charl sent shockwaves through the golf community by finishing birdie-birdie-birdie-birdie to win the Masters. At the time Rosalind and Charl had only been married about seven months.

While golf does take up a majority of time for Charl he always makes time for his side passion, being outdoors. Both Rosalind and Charl have gone on many outdoor adventures, including one that saw them cover nearly 9,000 miles.