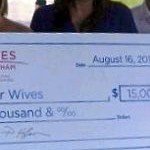 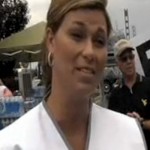 Any time there is a major tournament we typically take a look after the second round and see if there is anyone high on the leaderboard that we haven’t already covered. Usually we have one head scratcher at the top of the leader board that we have to do a lot of digging on to find some information for everyone. Carl Pettersson would be that guy for the PGA Championship. To make things even better, Carl’s six under performance at the PGA Championship couldn’t have come at a better time for his wife: it was on their wedding anniversary.

I figured going by his name that Carl was Swedish but then I saw his wife DeAnna Pettersson and thought that maybe that assumption was off. Carl Pettersson’s wife DeAnna Ellis is not the typical Swedish blonde bombshell that one might expect a Swede to marry. Turns out Carl has been all over the world as his dad was a Volvo executive who got transferred a few times. He has spent time in Sweden, England and eventually the United States where the family settled in North Carolina. It was in England that golf became Carl’s ticket to the big time. When the family moved to North Carolina Carl would continue to fine tune his game and end up at North Carolina State. It was at North Carolina State Carl would meet the future Mrs. Pettersson. The first thing that attracted DeAnna to Carl was his foreign accent. Totally makes sense, chicks always love a foreign accent. In 2003, while he was on the European Tour, Carl Pettersson married DeAnna Ellis.

DeAnna Ellis has been around the game of golf for a bit now and is very active in some of the PGA Tour charity ventures. She has been part of the PGA Tour Wives Association since 2003 and currently holds the role of VP of Membership. DeAnna is also an avid singer who still performs in her community. DeAnna, despite never having played golf before, even took part in the PGA Tour Wives Classic, where her husband Carl caddied for her. If you’re interested in keeping up with her more closely, she also tweets at @DePettersson. Currently she has a whopping 122 followers but we all know this could change if Carl wins the PGA Championship. One thing we did learn from DeAnna’s tweets is that this weekend is the couple’s anniversary. Carl Pettersson and DeAnna Ellis also have two children, Carie and Chase.